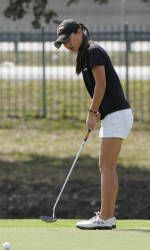 Canes In Fifth After Day One Action

In their second tournament of the year, the Canes shot a 305 in the first round of the day and a 302 in the second to combine for a score of 607.

Senior Jennifer Hirano shot an 11-over par 155 after the first 36 holes. Hirano was able to register par on 26 of the 36 holes played Saturday. Hirano is currently in a tie for 25th going into the final round.

Senior Patricia Arana and freshman Shannon Pak also competed for the Canes as each fired a 14-over, 158 on the day. Pak birdied twice on the day and Arana posted 23 pars.

Play at the Mary Fossum Invitational concludes with the final round Sunday. You can follow all the action at golfstat.com.