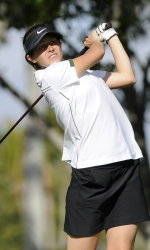 Canes Finish With Best Round of Tourney

HARAHAN, S.C. – Senior Jennifer Hirano and freshman Leticia Ras-Anderica each shot an even-par 72 and the University of Miami women’s golf team posted its best score of the three-day tournament to finish up play at the Cougar Classic.

The Canes shot a 292, their best round of the tournament and 11 strokes better than their performance yesterday.

“The team did great today,” said UM head women’s golf coach Patti Rizzo. “I am so proud of the 292 score. That is where we want our score to be and this is a great launching point for our tournament next week.”

LSU took the team title recording a 16-under par 848 for the tournament. North Carolina (853) placed second followed by Florida (856) in third, and North Carolina State and Georgia (864) tied for fourth to round out the top five. The Canes shot 897 and finished in 12th place.

Senior Jennifer Hirano continued her strong tournament as she made par on 16 of the 18 holes. She birdied one hole and only recorded one bogey. Hirano finished +6 for the tournament.

Freshman Leticia Ras-Anderica had an impressive showing this weekend in her first tournament for the Canes. She birdied three holes on the day and finished +6 for the tournament.

Freshman Shannon Pak was able to post a seven-over par 79 on the day including a one-over 37 on the back nine.

The Cougar Classic was hosted by the College of Charleston at Yeamans Hall Tuesday.

The Hurricanes return to action Sept. 17-18 at the Mary Fossum Invitational.