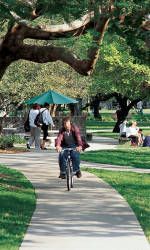 CORAL GABLES, Fla. — In the 2012 edition of theU.S. News & World Report’s annual “Best Colleges” issue, released today, the University of Miami has risen to number 38 – up from 47 last year, a nine point rise.  UM remains the highest ranked school in the state of Florida.

In an impressive ascent, UM has moved up 29 slots in the last 10 years, making it one of the fastest-rising institutions among national universities in recent times.

“We are absolutely delighted that U.S. News & World Report has moved the University of Miami from 47 to 38. We were a top 50 school last year and we’re a top 40 this year,” said UM President Donna E. Shalala.  “All the credit goes to our incredible faculty, student body, staff, trustees, alumni, parents, and all our supporters over the years. This has truly been a climb to excellence. The road to excellence means investments in our students, in our faculty, in our facilities. But more than anything else, it’s a tribute to all of those who believe in the University of Miami, who believe in quality education. This is a success story not just for the University but our entire South Florida community.”

UM is the only school currently in the top 50 to move up nine spots in one year and 29 spots in the past 10 years.  UM’s remarkable ascent in the rankings can be attributed to its marked improvement in key areas such as the six-year graduation rate, freshman retention rate, average SAT score of its incoming freshmen, and percentage of freshmen who were in the top 10% of their high school graduation class.

“Our rise in the US News & World Report rankings over the past decade reflects significant and steady improvements in student quality, retention, and graduation rates,” said Executive Vice President and Provost Thomas J. LeBlanc.  “The dramatic rise this year was due to continued improvements in those areas, coupled with an unusually large improvement in our undergraduate academic reputation, as measured by a survey of college presidents, provosts, admissions deans, and high school guidance counselors. It is especially gratifying to have our academic peers recognize the progress of the University of Miami as one of the nation’s best national research universities.”

UM’s breakthrough into the top tier two years ago came on the heels of the institution’s record-breaking Momentum campaign, which concluded at the end of 2007 and raised more than $1.4 billion for endowed chairs and professorships, scholarships, facilities, academic and medical programs, and other initiatives.

The editors of U.S. News & World Report have ranked the nation’s top universities and colleges for the past 28 years.  To learn more about the magazine’s methodology, visit www.usnews.com.

The University of Miami is the largest private research institution in the southeastern United States. The University’s mission is to provide quality education, attract and retain outstanding students, support the faculty and their research, and build an endowment for University initiatives.   www.miami.edu

GREENSBORO, N.C. (theACC.com) – The member institutions of the Atlantic Coast Conference lead the way among Bowl Championship Series Conferences in the latest “Best Colleges” rankings released today by US News & World Report. ACC member institutions rank on average 49.2, marking the sixth time in the last seven years that the ACC has led all BCS conferences.

“These rankings exemplify the long-standing commitment to academic excellence and the dedicated leadership of our 12 member institutions,” said ACC Commissioner John Swofford. “The Atlantic Coast Conference is proud to have a collection of schools that are held in such high esteem.”