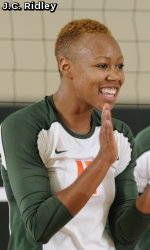 Baton Rouge, La. – Christine Williamson and Alex Johnson each accounted for a match-high tying eight kills to help lead the University of Miami to a 3-0 season-opening win over Jacksonville State Friday evening at the Tiger Classic. The event is being host by LSU inside the Maravich Center.

Johnson, a sophomore right side from Tallahassee, Fla., hit at a .500 clip with her eight kills against just one error. Redshirt senior Williamson needed just 16 swings to collect her eight kills, as the Tampa native hit .438 in the match.

“I thought we started out a bit anxious, but we were able to find our groove going into the third set,” said UM head coach Nicole Lantagne Welch. “Once we settled down, we were able to get our offense stronger with more rhythm. After that happened, we played Miami volleyball which led to the win.”

Carico would also claim nine digs and three assisted blocks, in addition to serving up a match-high four aces.

As a unit, the Hurricanes staked a match-high .467 attack percentage in the opening frame against the Gamecocks, amassing 14 kills on 30 swings with no errors. Miami was almost equally effecting in the third frame, collecting 14 kills and committing just one error on 33 swings.

Lauren Harkins and Alina Agamy led the Gamecock defense with 15 and 12 digs, respectively, while Hivya Leite’s nine kills paced the way on offense.

Miami will next take on Louisiana-Lafayette on Saturday at 1:30 p.m. (CST), later concluding its tournament run against homestanding LSU at 7 p.m. (CST).

All matches for the Tiger Classic will feature live stats, in addition to a live video stream for all matches involving LSU. The website for both stats and the video stream can be accessed by clicking here.