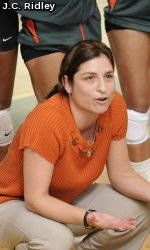 Coral Gables, Fla. – For the University of Miami volleyball team, it’s not just about making the NCAA Tournament anymore. The program, which in recent years has grown into one of the more successful ones on the East Coast, is about more than that now.

Head coach Nicole Lantagne Welch and her Canes opened their fall camp two weeks ago with one goal in mind – advancing in, not just reaching, the NCAA tournament. It’s a goal that’s not a hope or a reach, but an expectation given the strength, stability and direction of the program.

Volleyball returned to Miami in 2001 after a 19-year hiatus and when it re-started, Lantagne Welch was hired to build it back up from virtually nothing.

A decade later and here we are.

The Canes have won over 70 percent of their games over the last three seasons, reaching the NCAA tournament the last two. Unfortunately, however, they’ve been one-and-done in both tries and Lantagne Welch is determined to change that in 2011.

“We have high goals for our team and we want to keep advancing and going further than we have,” Lantagne Welch said. “That is a part of building the kind of program we want here at Miami.”

The kind of program she’s referring to is one whose young players are just as productive and successful as its veterans. After years of building, the infrastructure is set. It starts with Lantagne Welch and works its way down. Somewhere in the thick of things, right in the middle of the program’s surge in recent years, is All-America outside hitter Lane Carico. The senior, who is one of four players on the roster from California, has been nothing short of spectacular on the court for the Canes since arriving on campus in 2008.

Heading into her final season, Carico is on pace to break UM records and place herself among the Top 3 in school history in many statistical categories. After averaging nearly 450 kills per season her first three years, Carico needs just 139 more to break Karla Johnson’s school record of 1,484 kills set from 2002-05. And it’s not just kills. It’s digs, it’s attacks, it’s matches played and it’s points.

“Lane is a special player,” Lantagne Welch said. “She does a lot of things very well. Beyond that, she wants to be good. She is very coachable, works hard and wants to get it right. She has a lot of the intangibles that you can’t teach, like her desire. She is working to be a better leader for this group and that is a great thing to see as well.”

Joining her on the court this season is a seasoned group of veterans – including fellow seniors Christine Williamson, Ali Becker and Katie Gallagher – and sophomores Ryan Shaffer and Alex Johnson.

Williamson, who was injured much of her first two seasons, emerged last year as another threat on the outside along with Carico, ranking second on the team with 338 kills.

“The more we get from her, we know great things are happening,” Lantagne Welch said. “This is her last go around and she is passionate about making it special and making it her best year, not only for her, but for the team.”

Defensively, it starts with Shaffer, who by all accounts had one of the best freshman seasons in school history in 2010 as her 518 digs were the most ever by a UM player in their first season.

“Ryan had to step into the fire as a freshman and she handled it beautifully,” Lantagne Welch said. “I think in her second year you will see someone that is more confident. She is somebody that is going to be a steadying force for us and we are excited about that.”

With Carico, Williamson and Johnson leading the attack and Shaffer and Becker the key players in an improving defensive system, the Canes are poised for a longer run in the NCAA Tournament.

Success in the ACC and postseason appearances have become commonplace in Coral Gables thanks to a consistent flow of talented groups of student-athletes led by a determined head coach. The same coach who sees what she has and understands it’s potential.

Miami will open its season this Friday with heightened expectations and a lot of promise. The next four months will be about filling that potential.

Another 20-win season is expected. So is just reaching the NCAA Tournament.

The program is about more than that now, and everyone knows it.