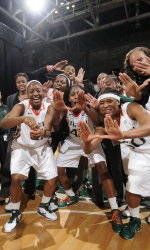 “Chris’ reputation, his tremendous experience in the ACC and with coaches I know and respect has left no doubt that he will be an invaluable asset to our program,” said Meier. “We are excited to have him in our U family.”

Brann will be responsible for team travel, the Tip-Off Club, budget management and will act as the team’s liaison between the coaching staff and the marketing and communications departments.

For the past two seasons, Brann held a similar role with the Denver University women’s basketball program. Prior to that, the Jacksonville, Fla. native worked with Boston College from 2006-09, where he was primarily responsible for assisting the head coach with non-conference scheduling, organizing all elements of team travel, coordinating all video needs, serving as camp director for the Boston College Girl’s Basketball Summer Camps and monitoring the academic progress of the student-athletes.