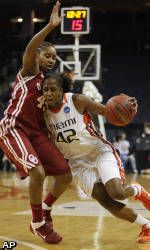 CORAL GABLES, Fla. – The University of Miami’s Riquna Williams and Shenise Johnson have been named to the 2011-12 preseason “Wade Watch” list for The State Farm Wade Trophy Division I Player of the Year Award.

The 25-member list is made up of top NCAA Division I student-athletes who best embody the spirit of Lily Margaret Wade according to the following criteria: game and season statistics, leadership, character, effect on their team and overall playing ability.

Both Williams and Johnson were named to the “Wade Watch” list as juniors at some point during the 2010-11 season. Johnson was included in the preseason list while Williams was added in the midseason edition.

The backcourt duo helped lead the Hurricanes to an ACC regular season title last season – Miami’s first since joining the conference in 2004. The Canes also earned a No. 3 seed in the NCAA Tournament and Johnson was named All-America by four different outlets, including the State Farm Coaches’ All-America Team.

The State Farm Wade Trophy, now in its 35th year and named after the late, legendary three-time national champion Delta State University Coach, debuted in 1978 as the first-ever women’s national player of the year award in college basketball. This high prestigious award, regarded as the “Heisman of Women’s Basketball,” is organized by the WBCA, in conjunction with the National Association for Girls and Women in Sport (NAGWS).

The 2012 State Farm Wade Trophy winner will be announced at the WBCA National Convention, held in conjunction with the NCAA Women’s Final Four, in Denver.