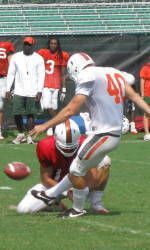 Canes Work on Special Teams in Second Practice on Tuesday

CORAL GABLES, Fla.– The University of Miami held its second practice of the day on Tuesday, getting in an hour of special teams work before lighting cut the session short. The practice was the second half of the team’s third two-a-day of camp.

After their customary stretch prior to practice, the Hurricanes – dressed in helmets and shells – separated into white and orange teams. The remainder of practice was spent working in different, kicking, punting and kick-off scenarios.

Going the Distance
Junior Jake Wieclaw and freshman Matt Goudis matched each other kick-for-kick from each hash up to 52 yards. Wieclaw also boomed a punt from his own endzone that sent the returner reeling before finally picking up the ball from his own 25-yard line.

Not in My House
Andrew Swasey raced through an opening on one of Goudis’ field goal attempts and with a leaping effort, was able to get a piece of the ball, leaving the kick to flutter wide left. Two plays later, Wake Forest transfer Mike Williams easily broke through the line and stuffed another Goudis attempt as the lighting detection system on Greentree sounded off, ending the session for good.

Season Tix
Season Tickets for the start of the Al Golden Era and the 2011 Hurricanes Football Season are on sale now. For more information call 1-800-Go-Canes or purchase your tickets through HurricaneSports.com by clicking here.