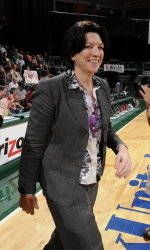 Katie Meier and Her 'Canes Break Through

CORAL GABLES, Fla. (AP) – Katie Meier was surrounded. Her Miami players were on one side, a mass of students who had just stormed the court to mark one of the Hurricanes’ biggest wins in years on the other.

Problem was, no one knew what to do next.

So Meier, screaming at the top of her lungs, started belting out one of Miami’s traditional victory chants – ”It’s great … to be … a Miami Hurricane!” – and by the time she could finish that line, everyone else picked up the tune.

Perhaps that’s the best example of how pronounced Miami’s struggles have been in recent years: They didn’t even know how to pull off a postgame celebration.

That’s not a problem anymore, not with the Hurricanes having climbed all the way to No. 10 in the nation and about to take a 26-3 record into this weekend’s Atlantic Coast Conference tournament.

And Meier is certainly in the conversation for national coach of the year – not long after her job security was in some doubt.

”I didn’t take a four-month sabbatical to go learn how to be a better coach,” Meier said. ”I didn’t go to that camp. Obviously, it’s my players.”

Whether she wants the credit or not, this much is known: She’s going to the NCAA tournament, and that is a breakthrough in itself.

Locks for their first berth since 2004, and possibly even a No. 2 seed depending on how the conference tournaments go around the nation, the Hurricanes have won six straight games and finished tied atop the ACC regular-season standings with Duke at 12-2.

To say the turnaround was dramatic would be understating things. Miami’s 12 wins against the ACC this year matched the total from its last 69 games in conference play entering the season.

”The best thing is waking up every morning knowing that I have an opportunity to play for Katie Meier,” Hurricanes guard Riquna Williams said. ”Just to be around a supportive family, knowing that I’m not going to be judged in negative ways, just ways that’s going to make me better and make me challenged.”

Meier knows what sort of atmosphere her players want to have – since it mirrors the one she preferred in her playing days.

Meier was a star player at Duke, winning ACC rookie of the year honors in 1986 and eventually became an Academic All-American. She’s a member of the Blue Devils’ Hall of Honor and was recognized as part of the ACC’s 50th anniversary team.

Meier spent seven seasons as an assistant at Tulane, before taking over at Charlotte in 2001. It didn’t take long for bigger schools to take notice, and in 2004, Miami asked her to meet school officials at the airport in Atlanta for an interview, in which Meier took a mildly unusual approach.

”I was very not trying to get the job,” Meier said. ”I was thinking, ‘Is this the fit?’ I was very happy at Charlotte.”

So she laid out her vision, and it wasn’t pretty. Meier told Miami that it would take some time to get the program where it needed to be in the ACC. If the Hurricanes were looking for a quick fix, look to hire someone else, she said.

”I didn’t want the job if they couldn’t hear that,” Meier said.

They listened. They made the offer. Meier drove home from the interview and called her longtime assistant, Darrick Gibbs, to deliver the news.

”Where we going?” he asked.

The Hurricanes made the WNIT final last season, helping set the stage for what’s happening now. Miami finished 20-0 at home, capping that part of the schedule off by beating archrival Florida State in the game where Meier hugged anyone she could get her long arms around and beckoned students to join her team on the floor.

She got emotional that night, and more so on Sunday, when Miami won at Georgia Tech to close out the ACC regular season. Duke will be the No. 1 seed for the ACC tournament, but Miami will call itself the league’s regular-season co-champion.

Meier hopes they’re not done there.

”I get that everyone thinks this is some dramatic turnaround,” Meier said. ”We’re not resetting anything now. There’s something magical going on with this team. We’re going to keep enjoying it, and I don’t know why people might be surprised by that. It’s exciting and we want to keep that rolling.”