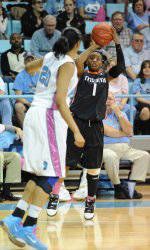 CORAL GABLES, Fla. – In what could be the most important women’s basketball game ever played inside of the BankUnited Center, No. 12 Miami will play host to No. 14 Florida State with much more than just a rivalry at stake.

The Hurricanes (24-3, 10-2 ACC) and Seminoles (22-5, 10-2) are currently in a three-way tie for first place in the Atlantic Coast Conference with Duke (24-3, 10-2). Duke owns the tie-breaker over UM and FSU, but all three still have two more regular season games remaining before the No. 1 seed in the ACC tournament can be secured.

That said, the implications on tonight’s game are huge.

“We are thrilled to be in a position where not only is this a big rivalry game and a game that means a lot to us for a lot of reasons, but it also can be a huge factor in the ACC,” head coach Katie Meier said. “We’re glad we are hosting the game as well. I think it is great for the Miami community and South Florida to come out and see two Florida teams trying to represent the ACC at the top of the standings.”

While Miami still has another tough game left at Georgia Tech (20-8, 8-4) to wrap up its regular season, a win tonight over their biggest rival will go a long way.

Maybe the most important item of note after Miami’s win over Wake Forest on Monday is that the `Canes can finish no worse than third, securing them a first round bye in next week’s ACC tournament in Greensboro.

“They bye was really important. As you can tell, someone is going to be a sixth seed going into that tournament that is no way a sixth seed,” added Meier. “They will be a lower seed in the ACC tournament than they will in the NCAA. I think just the bye is huge and that is something we’ve officially secured.”

Communication Will be Key

Thursday night’s meeting will be the second between Miami and FSU this year as the Seminoles came away with a 66-59 win over the `Canes on Jan. 24 in Tallahassee.

The `Canes were dreadful in the second half, shooting just 8-of-37 from the field, and were out-rebounded 47-to-28 in the game.

Meier, however, blames a lack of focus and togetherness for the `Canes flat outing.

“We weren’t communicating and working together,” Meier said. “Anytime we can talk, we talk and anytime we can face each other and look each other in the eye, we do it. I am constantly talking during the game and they are constantly giving me feedback. [That game] we just turned our backs to each other and we weren’t in it together. That I am sure we have changed.”
Meier’s star forward Shenise Johnson agrees.

“We weren’t looking each other in the eye,” Johnson said. “We were not there for each other. We definitely know who we are now.”

Considering the attention and ramifications around tonight’s game, look for the `Canes to be on their usual game.

It is Still a Rivalry

While most of the focus is on the ACC race, and rightly so, tonight’s game at the BankUnited Center is first-and-foremost a huge rivalry game.

The Seminoles hold a big edge in the all-time series (30 wins, eight losses), but the `Canes did beat the `Noles here last year, 78-70.

“I’m very excited, of course, to play our rivals at home,” Johnson said. “We definitely want to take advantage of this. I’m very excited but trying to stay composed, stay relaxed and stay cool. We’re not really feeling like there is any pressure on us. We are just going to continue doing what we have been doing and that is play Miami basketball.”

While the `Canes lead the ACC in scoring average at 80.3 points per game, FSU prides itself on its shooting, leading the league in three-point percentage (37.9) while ranking second in both field goal percentage (45.1) and free-throw percentage (69.9).

Both teams also ride an ACC-best four-game winning streak in.