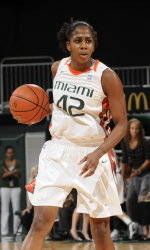 GREENSBORO, N.C. – University of Miami junior guard Shenise Johnson earned this week’s Atlantic Coast Conference Women’s Basketball Player of the Week honor, as announced by the conference office on Monday. It is her second consecutive player of the week nod and third overall of the season.

It is the fifth time in her career that Johnson has been named ACC Player of the Week. Teammate Riquna Williams has been awarded the honor on four occasions already this season, giving the Hurricanes seven weekly honors. No other ACC team has more than two weekly award winners.

Johnson led the `Canes to a big 90-80 road win at Boston College. The dynamic guard was instrumental in bringing UM back from a halftime deficit as she scored 30 points for the second time in three games and also grabbed seven rebounds and dished out a team-high eight assists.

The ACC’s weekly accolades are voted on by the league’s “Blue Ribbon Panel”, which consists of national and local media members, as well as school representatives. The panelists will also vote on the league’s postseason All-Conference teams for the 2010-11 season.

Miami is 23-3 and with a win tonight against Wake Forest would be tied for first place in the conference with a 10-2 ACC record. The Hurricanes will face No. 12 Florida State in the final home game of the season on Thursday. The game will be televised on Comcast Sports South at 7 p.m.