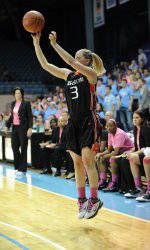 BOSTON (AP) – Riquna Williams scored 23 of her 25 points in the second half to lead No. 13 Miami to a 90-80 win over Boston College on Thursday night.

The Hurricanes (23-3, 9-2 Atlantic Coast Conference) were coming off their first back-to-back wins over ranked teams, beating Maryland and North Carolina. Miami entered with its best ranking since climbing to No. 6 in 1992.

Shenise Johnson, the reigning conference player of the week, had 30 points and Morgan Stroman had 12 points and 12 rebounds.

Shields hit a 3-pointer from the top of the key to tie it at 73 with just under 6 minutes to play, but Miami went on a 10-0 run over the next 2:48. Johnson had five points, including a three-point play, and Williams scored three during the run.

The Hurricanes, who trailed by eight at halftime, opened the second half with a 10-0 run – Williams had six points and Johnson the other four. Miami forced BC into four quick turnovers and a handful of tough shots for easy transition baskets.

The teams were tied three times before Williams and Johnson again took command, running the floor or driving the lane for easy baskets. After each BC miss, Williams would drive down the floor, catching the larger Eagles trailing badly on the break.

Williams and Johnson combined to score Miami’s first 24 points of the second half.

Williams was just 1 for 6 from the field in the opening half.

The Eagles had a hot shooting first half, going 7 of 15 on 3-point attempts and 51.5 percent overall from the floor to take a 49-41 lead into intermission.

BC started quickly, jumping to a 8-2 lead in the opening 2 1/2 minutes, before the Hurricanes answered back with strong inside scoring.

After Miami tied it at 8, neither team had more than a five-point edge until BC made a late run.

The Eagles struggled with Miami’s fullcourt pressure briefly before settling down and scoring 17 of the final 26 points of the first half, with Katie Zenevitch nailing a 3-pointer with 10 seconds to play.