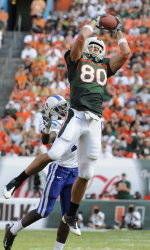 There are currently 42 former Hurricanes in the National Football League, but the route that New Orleans Saints tight end Jimmy Graham took might have been the most unique. The former UM basketball player has made a successful transition to the NFL after playing just one year of college football. His story is inspirational to all, proving that through hard work and perseverance, truly anything is possible.

Originally from Goldsboro, N.C., Graham’s home life as a child has been well-chronicled. He never knew his father and his mother decided to put him in a group home when he was just 11 years old. It was a less than ideal start to life.

However, his life turned around when he met his adoptive mother Rebecca Vinson.

“She helped me and believed in me when nobody did,” Graham recalled to the Associated Press. “I remember being a kid, and everyone told me I was going to be nothing, and she believed in me. I owe her everything.”

Vinson eventually sent Graham to Charis Prep for high school where he blossomed into a star athlete playing basketball, tennis, baseball and football during his time for the Crimson Tide. He saw the most success on the hardwood, as he averaged 20.7 points, 13.8 rebounds and 4.6 blocks per game as a senior, becoming an Honorable-Mention All-American by Street & Smith.

Basketball coaches across the nation took notice, as he became a top recruit.

“I saw this big, red-headed kid that could jump and was very raw offensively,” said Miami head coach Frank Haith, bringing up his first impression of Graham. “I loved his tenacity and how hard he played. He was fearless. Jimmy was on the floor more than anybody and was not afraid to take charges. You just loved that about him.”

Graham left Charis Prep after basketball season his season year and came to Coral Gables for the spring semester in 2005. He had no idea where his life as a student-athlete would take him.

The forward played four years for the Hurricanes under Haith from 2005 to 2009, earning a reputation as a physical, tough player under the basket. “He welcomed contact which made him a really good basketball player,” said Haith. “He was an outstanding defender and in terms of post defense, he was the best we ever had here.”

Graham ended up playing in 110 games for the Hurricanes, tying for the tenth-most games played in program history. He also ranks eighth in Miami history with 104 career blocked shots.

In addition, he averaged 4.3 points and 4.2 rebounds per game for his career.

Another telling statistic about Graham is that he ranks eighth in personal fouls in the University of Miami basketball history, highlighting his physical nature in competition.

It was that characteristic of the forward’s game that took the attention of UM President Donna Shalala who approached Graham about football.

“[Shalala] came up to me and said, ‘You know what? You need to be on the football field.’ I guess I was fouling so much,” he told Fox Sports.

From there things changed quickly for Graham. He traded in his sneakers and shorts for cleats and a helmet.

That was exactly the case for Graham.

Coach Randy Shannon picked up Graham and his 6-8, 250-pound frame and put it to use as a tight end in his pro-style offense.

It was a big challenge for him to convert to the football field since he had not played organized football since his freshman year in high school, but he was able to use his basketball skills on the football field to adjust to playing major college football at a high level. The transition also took plenty of studying and hard work off the field.

He played in all 13 games for the `Canes, catching 17 passes for 213 yards and five touchdowns, proving he could become a productive football player.

Graham was able to crossover some of his basketball skills and use them to his advantage on the football field. “One of my biggest skills is my hand-eye coordination and my ability to attack the ball in the air,” he said.

Graham improved so much during his one year of college football that he was invited to the NFL Combine to workout in front of NFL teams.

The New Orleans Saints took notice and selected him in the third round with the 95th overall pick.

He had more work to do.

“It’s one of those things where I was determined. I was determined to hush the critics and show everyone I could do it. I just kept grinding everyday. People questioned what I was doing,” said Graham.

“He really took me under his wing and helped me a lot to learn the NFL game,” said Graham.

It also helped that Graham played on the same unit as Super Bowl MVP, Drew Brees.

“He’s so pleasant to be around,”Brees told The Advocate.”If it’s `Hey, Jimmy, let’s get over here and do some more work,’ there’s a little pep in his step. He’s excited that you were thinking about him and want to include him, get him in the mix, as opposed to `ahhhhh: I’ve got to run 10 more routes.’ You can see where his commitment level is, and you can just tell this is a guy that’s not afraid to work. Whatever it was in his upbringing, he’s a fighter.”

That compliment means a lot coming from a player the caliber of Brees who also talked about Graham’s background as a basketball player.

“The coaches would say go up like a rebound or box-out the defender for position which made the learning curve easier,” Graham said.

In his rookie season, Graham made 31 receptions for 356 yards with five touchdowns, helping New Orleans get back to the playoffs as a wild card team. These numbers proved how hard Graham worked as they marked a significant improvement over his statistics at Miami.

“From the start to the end, I was a completely different player. I became more confident as the season went on,” said Graham.

In a Week 16 match-up on Monday Night Football at Atlanta, analyst Jon Gruden called Graham “a steal in the draft” believing that he would blossom into an elite player at the tight end position.

The best comparison to Graham’s entrance into the NFL would be San Diego Chargers tight end Antonio Gates’ story. Gates played college basketball at Kent State, becoming the school’s sixth all-time leading scorer. Not good enough to play in the NBA, he decided to take up football, a sport he had not played since high school. The San Diego Chargers liked his physical skills and signed him taking a chance. It has more than worked out for Gates and the Chargers, as he is a six-time Pro Bowler, three-time All-Pro and arguably the best at his position in the NFL.

Jimmy Graham has plenty of work to reach that status, but there is plenty of optimism for him going forward. He has battled the odds before and succeeded.

Graham also made strides in the classroom while at the University of Miami, earning a spot on the 2006 and 2007 All-ACC Academic Men’s Basketball team. The Business Management and Marketing double major was honored at his 2009 graduation ceremony with some well-deserving comments from President Donna Shalala.

“…this power forward known for his thunderous blocks has become a fan favorite over his four seasons with the men’s basketball team…and at this year’s awards banquet he was named outstanding defender for the second-straight season.

“To say that Jimmy Graham is not only an exceptional student-athlete, but also an inspiration to those who face adversity would be an understatement. Due to his family circumstances, Jimmy raised himself from the age of 11… Jimmy has gone from rebellious teen and straight-F student to college graduate.”

Graham’s past can be a lesson for all proving that children with troubled pasts can overcome them and be successful in life. In Graham’s case, he is now flourishing with a job as one of the 42 former `Canes in the NFL to go with a degree from the University of Miami. But his case is so different.

“He’s an example of someone that stayed focus, and that led him to great things,” said Coach Haith.