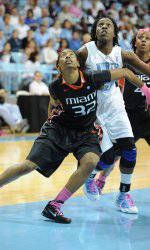 CORAL GABLES, Fla. – The University of Miami women’s basketball team moved up seven spots in today’s Associated Press poll to No. 13 after wins over No. 11 Maryland and No. 13 North Carolina last week.

The No. 13 ranking is the highest since the `Canes were ranked an all-time best 6th in the final poll of the 1991-92 season.

UM’s wins over Maryland and UNC marked the first time in the program’s 39-year history that the Hurricanes had defeated ranked teams in back-to-back games.

Miami is 22-3 and tied for second place in the conference with an 8-2 record and is 4-3 against ranked opponents on the year. Its eight ACC wins are the most for UM since joining the league in 2004. All three of Miami’s losses have come on the road against ranked foes, as it is a perfect 18-0 inside the BankUnited Center this season and are riding a 22-game home win-streak dating back to last season.

The Hurricanes head to the Northeast to face Boston College on Thursday at 7 p.m. The `Canes won the first meeting between the two teams on Jan. 16, 65-53, behind a season-high 33 points from Williams and 31 forced turnovers from the defense.

The ESPN/Coaches Top 25 poll will be released Tuesday afternoon.