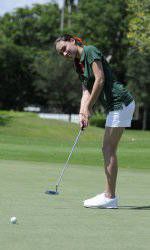 Senior Christina Hirano and freshman Carina Cuculiza each shot a team-low 79 in the second round.

Daytona State shot a 303 in the final round and 613 overall to repeat their title as JU Classic champions. UM and host Jacksonville each recorded 620 strokes to finish in second place.

Daytona State’s Mitsuki Katahira won the individual championship shooting a tournament record tying 69 in the final round and 143 overall.

Rain on Monday forced tournament officials to halt play in the midst of the second round and to cancel the third round that was scheduled for Tuesday. The second round resumed Tuesday morning with the status of the final round.

Ronderos shot a 153 in the tournament to finish in fifth. It is the seventh time in her career she has placed in the top 10. She notched four birdies for the event. Her best finish was a tie for second at the John Kirk/Panther Intercollegiate in 2008.

Christina Hirano took advantage of the par threes and fives (+1) to earn a score of 155, and a tie for seventh place. It is her third career top 10 and second-best placing in a tournament as a collegiate.

Jennifer Hirano and Cuculiza both registered 156 strokes in Jacksonville, good for a tie for ninth place. This was J. Hirano’s second career top 10 finish and Cuculiza’s first.

Patricia Arana finished in a tie for 20th in her first event as a Hurricane with a score of 162.

Miami will be back in action Sunday, Feb. 20 at the three-day Edwin Watts/Kiawah Classic in Kiawah Island, S.C.