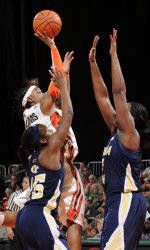 GREENSBORO, N.C. – University of Miami junior guard Riquna Williams has been named this week’s Atlantic Coast Conference Women’s Basketball Player of the Week honor as announced by the conference office on Monday – the fourth time this season she has earned the weekly accolade.

The honor is the sixth in Williams’ career after winning the award on Dec. 13, Dec. 27, Jan. 17 and twice as a sophomore. The Pahokee, Fla. native scored a total of 72 points in three games last week, including 27 in back-to-back home wins over NC State and No. 25 Georgia Tech.

After a tough seven-point loss at No. 16 Florida State, where she scored 18 points, Williams led her team to consecutive wins at the BankUnited Center – extending Miami’s home win streak to 21 games.

Williams currently leads the ACC in scoring at 21.4 points per game and in seven conference games so far, the explosive guard is averaging 25.3 points per contest.

With her six weekly awards, Williams surpasses Boston College’s Carolyn Swords for the most ACC Player of the Week awards among active players.

The Hurricanes will return to the hardwood when they travel to face No. 3 Duke in Durham, N.C. on Thursday, Feb. 3 at 7 p.m.