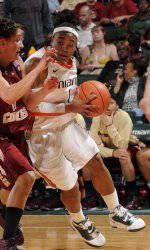 The Wolfpack rallied from a 79-66 deficit with an 11-2 run late in the second half. Amber White’s jumper with 55 seconds left capped the run and put North Carolina State within 81-77.

Johnson finished with 19 points and Morgan Stroman scored 18 points as the Hurricanes rebounded from their first conference loss Monday night at Florida State.

The Hurricanes went on a 13-0 run and took a 69-56 lead midway through the second half.

Williams, Miami’s leading scorer at 20.8 points per game, limped off the court favoring her right ankle after converting a layup 5 minutes into the second half. Williams was taken to the locker room, but returned to the game with 12:39 remaining.