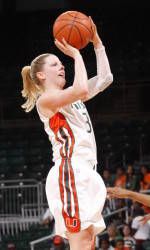 CORAL GABLES, Fla. – It has been eight days since the University of Miami women’s basketball team has played a game, but just hours before its key Atlantic Coast Conference match-up with No. 21 Florida State, the Hurricanes moved up one spot to No. 16 in the Associated Press Top 25 poll.

After home victories over ACC foes Clemson and Boston College, the `Canes moved up to No. 17 in last week’s poll from its previous No. 22 ranking.

The Hurricanes have opened their season with an 18-1 record and have won 17 consecutive games – the second-best win-streak in school history and is the second-longest current streak in the nation behind only No. 3 Duke. The Hurricanes 4-0 start in conference play is a first since joining the ACC in 2004.

Miami was led by junior guards Riquna Williams and Shenise Johnson in its perfect week. Williams and Johnson are the ACC Nos. 1 and 2 scorers in averaging 20.9 and 19.1 points per game respectively and Williams earned her third ACC Player of the Week honor of the season after scoring a combined 62 points in the wins over the Tigers and Eagles.

Last season, Miami briefly earned a No. 25 ranking in the AP Poll after its 78-70 victory over then No. 13 Florida State.