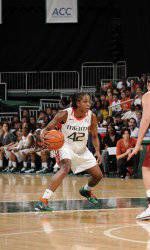 Florida State (16-4, 4-1 Atlantic Coast Conference) won despite 29 turnovers. The Seminoles scored 16 of the first 20 points in the second half to open up a 50-38 advantage after the score was tied at 34 at the half.

Miami (18-2, 4-1) cut its deficit to 60-57 in the last minute before Courtney Ward made three free throws and Cierra Bravard two to seal the win.

Bravard finished with 11 points and nine rebounds in 18 minutes.

Shenise Johnson scored 21 points and Riquna Williams 18 for Miami, which shot just 30.2 percent in the game. Williams made only 1 of her 14 field goal tries in the second half when Miami shot just 21.6 percent.

Miami’s only other loss of the season was at Nebraska on Nov. 17.

Florida State was up by 11 before a pair of free throws by Stefanie Yderstrom with 2:15 left started an 11-3 Miami run that got the ‘Canes to within three.

Johnson and Williams, the ACC’s top two scorers on the season, each had 13 points at the half for the ‘Canes.

Florida State dominated the rebounding by a 47-28 margin and shot 48.9 percent with its three double figure scorers good on 13 of 19 shots from the field.

Each team had a brief five-point lead during the opening half which featured nine lead changes. Florida State played most of the first half without Bravard and Howard.

Bravard drew her second foul in the early going and played just seven minutes before halftime while Howard suffered a knee injury 10 minutes into the game that kept her out until early in the second half.

Chelsea Davis picked up the slack for the Seminoles with six points and five rebounds in the first half.

Ward suffered through one of her worst nights, committing nine turnovers and hitting just one of eight field goal tries.