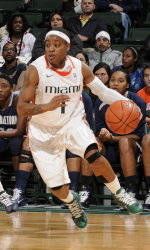 GREENSBORO, N.C. – University of Miami junior guard Riquna Williams has unanimously earned this week’s Atlantic Coast Conference Women’s Basketball Player of the Week honor as announced by the conference office on Monday – the third time this season she has earned the weekly accolade.

The honor is the fifth in Williams’ career after winning the award on Dec. 13, Dec. 27 and twice as a sophomore. The Pahokee, Fla. native scored a then season-high 29 points on 11-of-15 shooting in Miami’s ACC home-opening 77-48 victory at Clemson on Jan. 14. The 29-point margin of victory was the largest ever in a conference game since Miami joined the ACC in 2004.

Williams currently leads the ACC in scoring at 20.9 points per game and in four conference games so far, the explosive guard is averaging 26.3 points per contest.

With her five weekly awards, Williams surpasses Boston College’s Carolyn Swords for the most ACC Player of the Week awards among active players. Her unanimous selection is a first this season.

Miami is 4-0 in conference play for the first time in the ACC and 18-1 on the year – tied for the best start to a season after 19 games in program history.

The Hurricanes will return to the hardwood when they face No. 21 Florida State in Tallahassee, Fla. on Monday, Jan. 24 at 7 p.m. The `Canes current 17-game win streak is tied with No. 3 Duke for the nation’s longest.