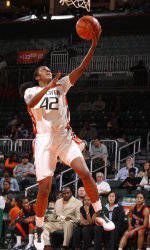 GAMEDAY
Undefeated in Atlantic Coast Conference play with a 3-0 record, the Hurricanes will face their toughest test yet with 14-3 Boston College Sunday at 1 p.m. at the BankUnited Center. The game will be televised on Fox Sports Florida, Fox Sports South and CSN Mid-Atlantic.

ACC AND EMPLOYEE DAY
Welcome the Atlantic Coast Conference to Coral Gables and have the chance to win great ACC prizes, such as SillyBandz, t-shirts and plush mini blimps. The ACC Shoe Blimp will be on hand for photo opportunities and may even take flight, so be on the lookout for prizes falling from the sky!

THE TEAMS
 Miami is ranked No. 22 in the AP poll and No. 25 in the ESPN/Coaches poll and has won 16 straight games – tied with Duke for the longest current win streak in the nation.
 Riquna Williams and Shenise Johnson are Nos. 1 and 2 in the Atlantic Coast in scoring with 20.3 and 19.0 points per game respectively.
 Boston College’s Carolyn Swords leads the nation with an astounding 72.4 field goal percentage. She also led the NCAA each of the last two season in that category.
 The Eagles are only one of a handful of teams that score more points that the Hurricanes. Their 84.9 points per game is second in the ACC and fifth in the nation.

THE NATIONALLY RANKED `CANES
After receiving votes in the AP and ESPN/Coaches Poll for the past several weeks, the Hurricanes finally cracked the Top 25 with a No. 22 ranking in the AP poll and a No. 25 spot in the ESPN/Coaches poll.

HOME COURT ADVANTAGE
The Hurricanes are a perfect 14-0 at home this season and have won 18 consecutive games inside the BankUnited Center dating back to the `Canes regular season-finale overtime win over Boston College on Feb. 28, 2010.

The 18 straight wins at home is tied for the second-longest home winning streak in program history and is the longest since the 1997-1998 through 1998-99 seasons.

NOS. 1 AND 2
As of Jan. 12, Miami junior Riquna Williams was leading the ACC with 20.3 points per game. In the conference the closest person to her is fellow teammate Shenise Johnson, who is scoring 19.0 points per game.

WINNING STREAK
Miami has won 16 straight games overall – the second longest streak in program history and is the longest current win streak in the country – tied with No. 3 Duke.

The Hurricanes have only reached a winning streak of at least 10 games five times previously and its the first such streak for the `Canes since the 1992-93 season, when they won 10 consecutive games.

GIMME THAT
With an average of 15.4 steals per game, the Hurricanes rank third in the nation. Riquna Williams get her hands in on 3.4 thefts per game, while Shenise Johnson and Morgan Stroman are close behind with 3.2 and 3.1 per outing respectively. Stefanie Yderstrom, Sylvia Bullock, Krystal Saunders and Shanel Williams each average one or more steals per game and as a team, Miami has scored 30.5 points per game off of turnovers – compared to only 12.5 from its opponents.

PLAYER OF THE WEEK PART 2
Riquna Williams earned the Atlantic Coast Conference Women’s Basketball Player of the Week honor as announced by the conference office on Dec. 27.

THREE-POINT STREAK
With nine three-pointers against Clemson, including six from Riquna Williams, the Hurricanes have made at least one three-point field goal in 310 straight games dating back to the 2000-01 season.