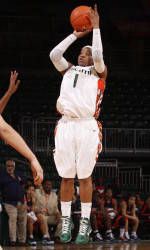 CORAL GABLES, Fla. – It is difficult to tell whether the University of Miami women’s basketball team is embracing its fast start, or quietly trying to fly under the radar and roll through teams as it has done through the season’s first few months.

Either way, whatever they are doing is working.

The 22nd-ranked `Canes are 16-1, riding a nation’s best 15-game winning streak and will be in search of their first-ever 4-0 start in ACC play when they play host to Clemson (Friday at 8:30 p.m.) and Boston College (Sunday at 1 p.m.) this weekend at the BankUnited Center.

The Hurricanes’ continued emergence on the national scene – and the recognition that goes along with it – is almost unavoidable at this point. Miami ranks third in the ACC in scoring (83.4 points per game), is beating teams by an average of 27 points per game, and boasts the top two scorers in the ACC in guards Riquna Williams (19.8) and Shenise Johnson (19.1).

The start has been impressive and surely worth noting, but the true test lies ahead as the steam of the ACC season picks up.

When asked on Thursday whether she is making any efforts to control the team’s excitement around the team’s growing success, Meier didn’t think twice about her answer.

“I don’t try to,” Meier said. “Why contain excitement? We’re excited. We’re an excitable team, we’re an emotional team and we’re having a great time together. We’re very business-like but we’re excited.”

That climb has brought the `Canes to where they are today, getting more and more attention from the media, fans and especially their opponents. People are taking notice and the team is embracing it every step of the way, regardless of whether they always show it.

The `Canes boast a clear advantage in Friday night’s contest, as Clemson comes in averaging an ACC-worst 61.3 points per game. The Tigers have lost seven of their last nine, while Miami is coming off of a pair of ACC road wins at Virginia and Virginia Tech.

Sunday’s game against Boston College will mark one of the best in the ACC this January, as both teams can score at will. The Eagles, who rank second in the league in averaging 85.3 points per game, are 14-3 overall and 1-1 in league play after a one-point loss to No. 8 North Carolina and an upset victory at No. 13 Maryland on Thursday night.

The `Canes will have their hands full, but as they have shown before (an 81-72 win over No. 11 Georgetown on Dec. 8), it won’t be easy for teams to win in Coral Gables with the way Meier has things rolling right now.

“This is a very fun team,” Meier said. “We are getting a ton of possessions, they dive on the floor, they high-five, they sprint to timeouts, they hug each other, they jump in the air. They have such flair and such a joy. If you are a sports fan at all, you are going to want to get caught up in it.”

TICKETS & TV
Both games this weekend (8:30 p.m. on Friday; 1 p.m. on Sunday) will be held at the BankUnited Center. Individual game tickets are available for $5 for adults, $3 for children and free for UM students presenting a valid Cane Card.

If you unable to attend, both games will be carried live on Fox Sports Florida, Fox Sports South and CSN Mid-Atlantic. Click here for a complete listing of how to find the `Canes this weekend.