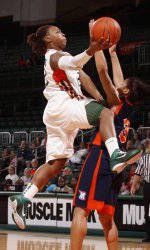 Miami Moves Up to No. 25 in ESPN/Coaches Poll

CORAL GABLES, Fla. – A day after it claimed a No. 22 ranking in the Associated Press Top 25, the University of Miami women’s basketball team was awarded the No. 25 spot in the ESPN/Coaches Poll on Tuesday.

It is the first time since March 15, 2004 that the Hurricanes – winners of 15 straight games – have been ranked in the coaches poll.

The Hurricanes have been led by the three-headed attack of junior guards Shenise Johnson and Riquna Williams and sophomore forward Morgan Stroman. Williams and Johnson are the ACC Nos. 1 and 2 scorers in averaging 19.8 and 19.1 points per game respectively. Stroman also averages double-figures with 14.5 points per night.

Head coach Katie Meier led her squad to road wins over Virginia and Virginia Tech this past week to open 2-0 in Atlantic Coast Conference play for the first time in school history.

The Hurricanes 17-game home win-streak – the second longest in school history – will be put on the line when Clemson and Boston College visit Coral Gables this weekend. Clemson will visit the BankUnited Center this Friday at 8:30 p.m., while the `Canes will host Boston College Sunday at 1 p.m. Both games with be televised on Fox Sports Florida.