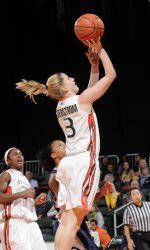 GAMEDAY
The Hurricanes open the new year in a home contest when they host Lipscomb at the BankUnited Center Saturday at 2 p.m.

THE TEAMS
 Miami has won 16 consecutive games at the BankUnited Center and 12 straight overall. The Hurricanes 13-1 start is tied for the best start to a season in program history after 14 games.
 Shenise Johnson was named the Miami Holiday Classic MVP after scoring 19 points against George Washington and 22 versus Morgan State. She also added 10 rebounds against the bears for her fifth double-double of the season.
 Lipscomb is 2-0 in the Atlantic Sun Conference after 10-point wins over Mercer and Kennesaw State. However, the Bisons dropped their last game at South Alabama 69-41.
 Jenna Bartsokas and Anna Bowers score 14.9 and 14.2 points per game respectively.

Tamara James’ HONORED JERSEY
The greatest player in Miami women’s basketball history had her jersey honored prior to the Morgan State game on Dec. 30.

ACC PLAYER OF THE WEEK PT. 2
Riquna Williams earned the Atlantic Coast Conference Women’s Basketball Player of the Week honor as announced by the conference office on Dec. 27.

TOURNAMENT CHAMPIONS
The `Canes won their own Thanksgiving Tournament for the fifth time in the last six years. Morgan Stroman was the named the tourney MVP as Miami cruised to wins over FAU and UNC Greensboro. Shenise Johnson was also named to the all-tournament team.

THREE-POINT STREAK
With Stefanie Yderstrom’s three-pointer against Morgan State, the Hurricanes have made at least one three-point field goal in 304 straight games dating back to the 2000-01 season.

HOME COURT ADVANTAGE
The Hurricanes are a perfect 12-0 at home this season and have won 16 consecutive games inside the BankUnited Center dating back to the `Canes regular season-finale overtime win over Boston College on Feb. 28, 2010.