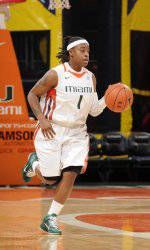 CORAL GABLES, Fla. – The University of Miami will honor former Hurricane great Tamara James tomorrow when her No. 2 jersey will be raised to the rafters before the `Canes take on Morgan State in the final game of the Miami Holiday Classic.

The ceremony will take place between the UM men’s basketball game vs. Pepperdine at 6 p.m. and the women’s game, which will begin approximately 20 minutes after the conclusion of the men’s game.

The honored jersey will be just the third women’s jersey to hang from the rafters at the BankUnited Center – joining UM greats Maria Rivera (1984-88) and Frances Savage (1988-92).

The Hurricanes enter Thursday’s contest with a record of 12-1 – tied for the best start in program history after 13 games. The `Canes are a perfect 11-0 at home and have won 15 straight games at the BankUnited Center dating back to last season.

UM is sponsoring a special $5 ticket deal for both games. The Doubleheader Deal is available for purchase online at HurricaneSports.com, by calling 1-800-GO- CANES, at the Hurricane Ticket Office (8:30 a.m. – 5 p.m.; closed Dec. 22-Jan. 3) or on gameday at the BankUnited Center Box Office.