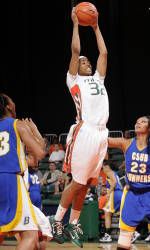 GAMEDAY
The University of Miami women’s basketball team will host George Washington in the opening game of the 2010 Miami Holiday Classic Wednesday at 7 p.m. at the BankUnited Center.

THE TEAMS
 After a homestand that saw the `Canes finish a perfect 9-0, Miami traveled to Ole Miss and won its 10th consecutive game in impressive fashion – dismantling the Rebels 82-46.
 With a 11-1 overall record, Miami has matched its second-best start to a season in program history after 12 games. The Hurricanes started 12-0 in 2003-04 and were 11-1 in 1991-92 and 2009-10.
 George Washington is coming hasn’t played since a 64-60 loss to its cross-town foe American on Dec. 18. In that game, three Colonial players scored in double-figures – led by Ivy Abiona’s 14 points – Brooke Wilson scored 13 and Tara Booker added 11.
 The Colonials are without a scorer that averages in double-figures. Tara Booker is the team-leader with 9.8 points per game.

MIAMI HOLIDAY CLASSIC
The Hurricanes will be hosting the Miami Holiday Classic Dec. 28-30 at the BankUnited Center.

The match-up with Morgan State will be just a part of a special day for Hurricane basketball. At 6 p.m. at the BankUnited Center, the men’s basketball team will tip-off against Pepperdine. Then during a 20-minute break before the women’s game, Miami’s all-time leading scorer, Tamara James will have her jersey honored in a special on-court ceremony.

Tamara James’ CEREMONY
The greatest player in Miami women’s basketball history will have her jersey honored prior to the Morgan State game on Dec. 30.

HOME FOR THE HOLIDAYS
The University of Miami hosted and won the UM Thanksgiving Tournament with victories over FAU and UNC Greensboro. Miami will also play host to the UM Holiday Classic at the BankUnited Center Dec. 28-30.

ACC PLAYER OF THE WEEK PT. 2
Riquna Williams earned the Atlantic Coast Conference Women’s Basketball Player of the Week honor as announced by the conference office on Dec. 27.

TOURNAMENT CHAMPIONS
The `Canes won their own Thanksgiving Tournament for the fifth time in the last six years. Morgan Stroman was the named the tourney MVP as Miami cruised to wins over FAU and UNC Greensboro. Shenise Johnson was also named to the all-tournament team.

THREE-POINT STREAK
With four three-pointers against Alcorn State, the Hurricanes have made at least one three-point field goal in 302 straight games dating back to the 2000-01 season.

GIMME THAT
With an average of 15.2 steals per game, the Hurricanes rank fourth in the nation. Shenise Johnson and Morgan Stroman get their hands in on 3.2 and 3.0 thefts per game respectively, while Riquna Williams is close behind with 2.7 per outing. Stefanie Yderstrom, Sylvia Bullock, Krystal Saunders and Shanel Williams each average one or more steals per game and as a team, Miami has scored 29.1 points per game off of turnovers – compared to only 11.5 from its opponents.

HOME COURT ADVANTAGE
The Hurricanes are a perfect 10-0 at home this season and have won 14 consecutive games inside the BankUnited Center dating back to the `Canes regular season-finale overtime win over Boston College on Feb. 28, 2010.

HOME COURT ADVANTAGE
Miami has won 10 straight games overall. In program history, the Hurricanes have only reached a winning streak of at least 10 games five times previously and its the first such streak for the `Canes since the 1992-93 season, when they also won 10 consecutive games.