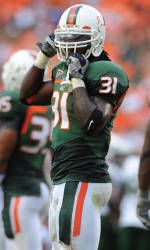 Hankerson is in the midst of arguably the best statistical season by a wide receiver in Miami history.  Hankerson has a UM record 12 touchdown receptions, while leading the ACC and gaining on the UM records with 1,085 yards and 66 receptions.

Hankerson, Spence and their teammates are wrapping up finals this week and will continue on-field preparations for the 2010 Hyundai Sun Bowl on Wednesday morning.  The ‘Canes and Notre Dame Fighting Irish will renew their rivalry in front of a national TV audience on CBS on Dec. 31 at 2 p.m. Eastern.