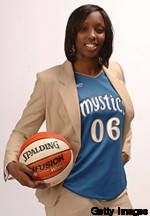 CORAL GABLES, Fla. – University of Miami Director of Athletics Kirby Hocutt and head women’s basketball coach Katie Meier have announced that former Hurricane great Tamara James will have her No. 2 jersey honored prior to the Miami’s game against Morgan State on Dec. 30.

The honored jersey will be just the third women’s jersey to hang from the rafters at the BankUnited Center – joining UM greats Maria Rivera (1984-88) and Frances Savage (1988-92).

Meier added, “Tamara is a tremendous talent and competitor. My expectations are that all of South Florida will come out to celebrate this incredible young woman who did so much in representing the basketball program and the University.”

James will be honored between the UM men’s game against Pepperdine at 6 p.m. and the women’s game that will start approximately 30 minutes later.

Tickets can be purchased in advance on HurricaneSports.com or by calling 1-800-GO CANES. The University announced that fans can purchase a discounted $5 ticket and receive admission for both games.