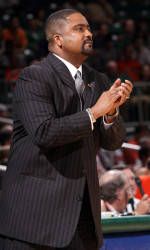 CORAL GABLES, Fla. – The University of Miami men’s basketball team has a chance for another statement win when it plays host to 2010 NCAA Final Four participant West Virginia Saturday afternoon at the BankUnited Center.

Here are some storylines to watch for heading into the much-anticipated game between Miami (5-2) and West Virginia (5-1) at the BUC….

One Down, One to Go
The Hurricanes came into the week knowing they had two big opportunities for resumé-building, non-conference wins with Ole Miss and West Virginia visiting the BankUnited Center.

The first match-up easily went in Miami’s favor, as the `Canes cruised to an 86-73 win over the Rebels Tuesday night. Miami turned in its best showing of the young season, leading by as much as 32 early in the second half.

“We have got to learn from this game and take some things from this game and just be ready to play,” head coach Frank Haith said. “West Virginia has nine players returning from a team that went to the Final Four last year…it’s a heck of an opportunity. It is going to be exciting for our guys to have a chance to compete against a great team.”

Durand Scott, who scored a career-high 27 Tuesday night, knows just how big Saturday’s game is for the `Canes.

“It’s a great opportunity,” Scott said. “It’s an opportunity that we don’t want to lose or take for granted. We just want to go out there and play as hard as we can…hopefully we come out with a `W’.”

NYC Reunion
Saturday’s game will be a reunion of sorts for Miami’s Durand Scott and West Virginia’s Darryl “Truck” Bryant as the guards were once teammates on the nationally-renowned New York Gauchos AAU team growing up.

Scott, who is a graduate of Harlem’s Rice High School, leads the `Canes in scoring (14.6 ppg) and assists (4.6 apg) this season while Bryant, who went to St. Raymond’s High in the Bronx, averages 10.8 points and 3.0 assists this season. That same Gauchos team that Scott and Bryant played for also boasted UConn’s Kemba Walker, who is averaging 30 points a game this year for the Huskies.

A Developing Force
It is still early, but sophomore center Reggie Johnson has quickly established himself as one of the top post players in the ACC through the first month of the season. Johnson is one of just three players in the conference (along with Maryland’s Jordan Williams and North Carolina’s John Henson) currently averaging a double-double. He has recorded double-doubles in five on Miami’s last six contests and is now averaging 12.7 points and 10.4 rebounds per game.

“Reggie has been producing all year,” Haith said. “Hopefully he can keep that up. There is no question Reggie is a big part of our offensive game plan.”

Johnson leads the ACC in offensive rebounds per game (4.6) and is the main reason why Miami has easily been the league’s best rebounding team, enjoying a margin of +9.9 per game (with Maryland second in the ACC at +7.9).

Scheduling Oddity
With Miami playing host to Ole Miss and West Virginia in back-to-back home games, Frank Haith and his staff might as well have gone back to find old tapes of Cincinnati Bearcats games as Rebel head coach Andy Kennedy was an understudy to WVU head man Bob Huggins at Cincinnati from 2001-2005.

Kennedy served as Huggins’ right-hand man at UC before serving as the interim coach of the Bearcats during the 2005-06 season after Huggins left for Kansas State.

Both Ole Miss and WVU feature big, athletic teams — much like Huggins’ Cincinnati teams were well known for. Reggie Johnson (17 points, 10 rebounds vs. Ole Miss) will be a key again as guys like Kevin Jones (13.0 ppg, 6.0 rpg) and John Flowers (8.2 ppg, 6.5 rpg) can play around the rim on both ends of the court.

Road Test for the `Neers
West Virginia has yet to play a true road game this season, playing two games at home and four on neutral courts through the season’s first month. Saturday’s game will be WVU’s toughest test to date with a big crowd expected at the BUC for what will be of Miami’s bigger non-conference games in recent memory.

The Hurricanes will host a regular slate of eight ACC games, including games against Duke, North Carolina, Florida State, Maryland and Virginia Tech.

Visit HurricaneSports.com or call 1-800-GO-CANES to order your tickets. Individual game tickets for ACC contests will open to the general public on Wed., Dec. 15.