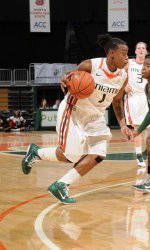 `Canes Back in Action After Quick Turnaround

GAMEDAY
In the fifth game of a nine-game homestand, the University of Miami women’s basketball team will play host to Southern on Monday at 7 p.m. at the BankUnited Center.

THE TEAMS
 The `Canes defeated FAU and UNC Greensboro by a combined 59 points to win the UM Thanksgiving Tournament for the fifth time in six years.
 Morgan Stroman was named the UM Thanksgiving Tournament MVP after she averaged 18.0 points and 7.5 rebounds in the two-game event.
 The Jaguars are 2-2 on the season, with wins over Texas A&M Corpus Christi and Louisiana and losses to Iowa and South Alabama.
 Southern has had six days to prepare for Miami, after its 75-65 win over Louisiana on Nov. 23.

HOOPS FOR HUNGER
The University of Miami announced that tickets to the women’s basketball game on Monday will be available for $1 with the donation of a canned food item.

Collections will only be taken on game day at the BankUnited Center.

HOME FOR THE HOLIDAYS
The University of Miami will be hosted and won the UM Thanksgiving Tournament with victories over FAU and UNC Greensboro. Miami will also play host to the UM Holiday classic at the BankUnited Center Nov. 28-30.

THREE-POINT STREAK
With five threes against UNC Greensboro, the Hurricanes have made at least one three-point field goal in 298 straight games dating back to the 2000-01 season –
currently the 11th-best active streak in the nation.

DOUBLE-FIGURE STREAK
With a 15 points against UNC Greensboro, Shenise Johnson has now scored in double-figures in 43 straight games – the highest active streak of any Atlantic Coast Conference player.