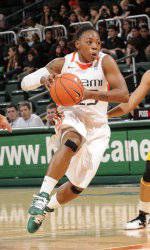 GAMEDAY
The Hurricanes are set to host the 2010 University of Miami Women’s Basketball Tournament this Friday and Saturday at the BankUnited Center.

The `Canes welcome FAU, UNC Greensboro and Eastern Illinois to Coral Gables for the sixth edition of what has become an annual event.

UNC Greensboro will open the tournament on Friday as they square off at 5 p.m. while Miami and FAU will play in the night cap at 7 p.m.

Saturday’s consolation game will tip-off at 5 p.m. with the championship set for 7 p.m. to close out the action.

THE TEAMS
 The `Canes moved to 3-1 on the season with a 68-52 win over UAB on Monday. Shenise Johnson and Riquna Williams were honored before the game for scoring their 1,000th career points.
 FAU had dropped three straight games before holding on to defeat Eastern Kentucky on Monday by a score of 60-57. Teri Stamps leads the Owls with 12.6 points per game while Vontrice Dennis is pulling down 10.2 rebounds per contest.
 Eastern Illinois dropped to 1-3 on the season after a 77-72 loss to Bradley on Monday. Ta’Kanya Nixon (13.0 ppg) leads a trio of women that average 12.3 or more points per game. Nixon is also the team’s top rebounder (8.5 rpg) and ranks second on the squad with 13 assists on the year.
 With its 77-67 loss to Charleston Southern on Monday, UNC Greensboro fell to 0-3 on the season. Monique Floyd and Sidnei Harmon score 13.3 and 11.0 points per game respectively to lead the Spartans. Dayshaun Richbow leads the squad with 12 assists so far this season.

HOOPS FOR HUNGER
The University of Miami announced that tickets to the women’s basketball games on Friday, Saturday and Monday will be available for $1 with the donation of a canned food item.

Collections will only be taken on game days at the BankUnited Center.

THANKSGIVING TOURNAMENT
The 2010 University of Miami Women’s Basketball Thanksgiving Tournament will mark the sixth time that the Hurricanes have hosted the event.

The `Canes have posted a 9-1 record the previous five seasons, with its only loss coming at the hands of Butler in 2007.

THREE-POINT STREAK
With nine threes against Miami (OH), the Hurricanes have made at least one three-point field goal in 295 straight games dating back to the 2000-01 season – currently the 11th-best active streak in the nation.

DOUBLE-FIGURE STREAK
With a season-best 24 points against Miami (OH), Shenise Johnson has now scored in double-figures in 40 straight games – the highest active streak of any Atlantic Coast Conference player.

PLAYER OF THE YEAR CANDIDATES
University of Miami junior guards Riquna Williams and Shenise Johnson have been named to the 2010-11 Naismith Preseason Watch List as announced by the Atlanta Tipoff Club.