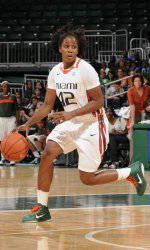 ATLANTA – University of Miami junior guards Riquna Williams and Shenise Johnson have been named to the 2010-11 Naismith Preseason Watch List as announced by the Atlanta Tipoff Club.

The Naismith Trophy is the most prestigious national award presented annually to college basketball’s player of the year. For more information, visit www.naismithawards.com .

The watch list was compiled by the Atlanta Tipoff Club’s Board of Selectors, which based its criteria on player performances from the previous year and expectations for the 2010-11 college basketball season. The Naismith Trophy presented by AT&T will be awarded on April 4, 2011 at the NCAA Women’s Final Four in Indianapolis.

Four games into this season, the tandem has improved on those gaudy numbers from last. Williams currently leads the conference in averaging 22.5 points per game while Johnson is right behind her at 21.0. Johnson – as she has every year in her career, leads the `Canes with 8.3 rebounds per game. Williams leads Miami with 13 assists while only committing one turnover in her last three contests.

“They have given so much to this program as we work towards being a consistent postseason team,” added Meier. “Their individual talent is amazing, but what has impressed me is how hard they’ve worked in developing their overall games.”

Last season, the duo led the Hurricanes to a championship appearance in the Women’s National Invitational Tournament. Along the way, they each earned All-ACC honors and were named to the WNIT All-Tournament Team.