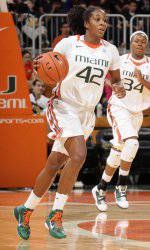 GAMEDAY
The University of Miami (2-1) women’s basketball team plays host to UAB (2-1) Monday at 7 p.m. at the BankUnited Center.

THE TEAMS
 The game on Monday will be the fourth meeting between the two teams. The Hurricanes knocked off the Blazers a season ago, 70-54 in what was the first meeting for the teams since 1980.
 The Hurricanes are one of 22 teams that received votes in the latest AP Poll.
 Riquna Williams became the second current Hurricane (Shenise Johnson) to crack the 1,000 point mark as she scored 18 points against Miami (OH) on Saturday. Johnson finished that game with 24 points and 11 rebounds.
 UAB won its second straight game when it defeated Louisiana 58-46 on Saturday behind Jala Harris’ 22 points.
 The Blazers return 10 letterwinners – four of them starters – from a season ago. The 2009-10 squad was the first since 2000 to advance to the Conference USA Championship Game.

THE COACHES
 Katie Meier is 74-85 in her sixth season at Miami and is 150-130 overall. She signed a five-year contract extension in the offseason after leading the `Canes to the WNIT Championship game and a 2009-10 record of 22-14.
 Audra Smith returns for her 7th season as the head coach of the UAB women’s basketball program. SMith has posted an 83-100 record at the helm of the Blazers – her only head coaching stop.

SPECIAL HONORS
In a special pregame ceremony on Monday, Shenise Johnson and Riquna Williams will be recognized for scoring their 1,000th career point.

Shenise Johnson accomplished the feat in the WNIT quarterfinal round at Providence, when she poured in a career-best 33 points.

On Saturday against Miami (OH), junior guard Riquna Williams became the 21st player in program history to reach the mark.

The service will be provided at a fee. To sign-up visit hurricanesports.cstv.com/allaccess/

IN-GAME CHAT
HurricaneSports.com will feature a live gameday chat for fans to follow at home or in the office. To participate in the in-game chat below, return to this page 30-minutes prior to kick-off. Live stats will also be available at HurricaneSports.com

THREE-POINT STREAK
With nine threes against Miami (OH), the Hurricanes have made at least one three-point field goal in 295 straight games dating back to the 2000-01 season – currently the 11th-best active streak in the nation.

DOUBLE-DOUBLE TROUBLE
The Hurricanes led the ACC with 22 double-doubles last season. After just three games this season they seem to be picking up where they left off as Riquna Williams, Shenise Johnson and Morgan Stroman all recorded double-doubles against Kennesaw State to open the year. Johnson added her second double-double of the year with a 24 point, 11 rebound performance against Miami (OH).

DOUBLE-FIGURE STREAK
With a season-best 24 points against Miami (OH), Shenise Johnson has now scored in double-figures in 40 straight games – the highest active streak of any Atlantic Coast Conference player.

FIFTH-ANNUAL YOUTH DAY
The University of Miami welcomed elementary and middle school children to be a `Cane for a Day at Youth Day at the `Canes home-opening win over Kennesaw State.

The School of Education, the President’s Office, Big Cheese and McDonald’s teamed up to provide a fun-filled day for local youth and to express the importance of education. Schools had the opportunity to showcase their cheerleaders or dance teams, as well as, nominate an Honorary Ball Kid that was recognized on court.

The future Hurricanes were treated to special halftime entertainment as Sebastian rounded up several of his friends and played a friendly game of hoops.