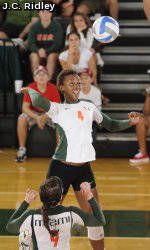 Miami (19-8, 9-7 Atlantic Coast Conference) came out strong in the first two sets, hitting above .400 as a team in the two set victories. During the second frame, senior middle blocker Ariell Cooke and redshirt junior outside hitter Christine Williamson tallied two blocks apiece to assist in holding the Wolfpack offensive attack to just a .158 hitting percentage.

After the intermission, NC State (13-15, 3-13 ACC) came out strong in the third set, picking up six team blocks (three solo / six assisted) in the frame to hold the UM attack at a match-low .143 clip (13k-7e-42ta). The Wolfpack used five kills from Luciana Shafer and three solo blocks from Margaret Salata in the win.

The fourth set belonged to the Hurricanes right from the beginning.

The `Canes jumped out to an 8-3 advantage behind a block and kill from junior middle blocker Ali Becker, as well as four unforced errors charged to the Wolfpack.

Leading 12-7 following an NC State timeout, Miami ended the set on a 12-6 run, sparked by the play of two-time All-ACC and AVCA East Region performer Lane Carico with six kills – and Becker added three kills and three assisted blocks, topping off the 25-13 win.

UM holds the 31st-rated RPI in the latest NCAA RPI rankings, and continues to sit alongside in-state ACC foe Florida State in a share for third place in the league standings. FSU defeated North Carolina in five sets tonight, allowing the Seminoles a half-game lead over UM, having won the only meeting of the year between the two schools in Coral Gables. The rematch between the two “Sunshine State” opponents is scheduled for Fri., Nov. 26, in Tallahassee.

NC State was led on the night by Alex Smith with a match-high tying 17 kills. Also in double-figures in kills for the Wolfpack was Shafer with 12, adding 12 digs and a block in a double-double effort. Setter Megan Cyr handed out 44 assists, and libero Kelly Wood led the defensive charge with a match-high 24 digs.

UM was led by Carico’s match-high tying 17 kills – swinging at a .295 clip on 44 attacks, also collecting 11 digs for her 12th consecutive double-double (22nd of the year). Cooke claimed 12 kills and two assisted blocks, leading the team in hitting, using a .407 percentage on 27 swings. The third Hurricane in double digits for kills was Becker (10), also adding three assisted blocks.

Miami continues its four-match homestand on Sun., Nov. 14, playing host to the University of North Carolina at the James L. Knight Sports Complex. Match time is set for 1 p.m.