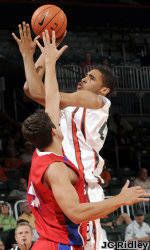 CORAL GABLES, Fla. – The University of Miami men’s basketball team plays host to Barry in exhibition competition at the BankUnited Center on Wed., Nov. 3, at 7:30 p.m.

The Hurricanes – who went 20-13 last season and advanced to the ACC Tournament semifinals before falling to eventual national champion Duke, 77-74 – will play a pair of exhibition games at home before opening the regular season versus Jacksonville on Fri., Nov. 12, at 7:30 p.m. The Dolphins also went 20-13 in 2010 and won their second-straight Atlantic Sun regular-season title, advancing to the NIT’s second round after crossing the country to knock off Arizona State.

Miami returns four starters from 2010, including ACC All-Rookie Team and All-Tournament First Team pick Durand Scott and ACC All-Tournament Second Team selection Reggie Johnson, in addition to the ACC’s most accurate three-point shooter in Adrian Thomas. Over his final nine games as a true freshman last season, Scott averaged 16.3 points per game, while converting 52.6 percent from the field and 81.5 percent from the line. Johnson added 15.5 points and 6.8 rebounds per game, while shooting 63 percent from the field over his last four games as a redshirt freshman. Thomas has hit a three in 11-straight games heading into this season – the longest active streak in the ACC.

Barry is coming off one of its best seasons as the Bucs went 20-12 and advanced to the NCAA Division II South Region Tournament, where they defeated Florida Southern, 64-59 – Miami’s exhibition opponent on Mon., Nov. 8 – before falling in the second round to Rollins. The Bucs lost their two leading scorers from last season, but return senior guard Zack Trapp, who posted 10.1 points and a team-high 2.3 three-pointers per game and senior center Willie Whitfield, who added 9.8 points and 6.0 rebounds an outing.

Wednesday’s game will also serve as a Select-A-Seat for Hurricane fans. Current season ticket holders may relocate their seats on Wednesday, while fans that have yet to purchase their 2010-11 season tickets will have the opportunity to choose their seats. Reserved seat season tickets begin as low as $99, while prices have been reduced in several sections – including a $650 savings in H-100 seats.

Admission to the game will be free, however fans will need to download and print their complimentary tickets at http://www.ticketmaster.com/event/0D004559D34F66C6.Select the number of tickets you need, fill out your information and your tickets will be e-mailed to you. For additional ticket information, please contact the Hurricane Ticket Office online at www.hurricanesports.com or by phone at 1-800-GO-CANES.