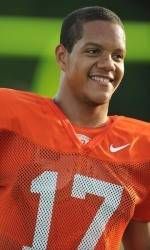 Morris Will be Ready if Jacory Needs More Time

CORAL GABLES, Fla. – As Miami’s scout team quarterback, Stephen Morris has spent most of the fall emulating guys like Terrelle Pryor, Kyle Parker and Christian Ponder in practice. This week, he’ll be himself.

Morris made his collegiate debut Saturday at Virginia after Harris was knocked out of the game with what turned out to be a concussion. In just one half of football, Morris opened eyes, accounting for three touchdowns (two passing, one rushing), 162 yards passing and 23 rushing as he nearly brought the `Canes back from a 24-point fourth quarter deficit.

“It was very tough to come into a situation like that as a true freshman, going in there and running the offense,” Shannon said. “But he had to learn. He made some good throws, he made one bad one, but he bounced back.”

“Anytime you have a young man do those kinds of things and give you a chance, being so young, shows a lot about how he can improve and how much he can really help this football team,” Shannon added.

The decision to put him in on Saturday would at first appear to be a difficult one, considering the move burned an expected redshirt season for Morris. According to Shannon though, the decision wasn’t as complicated.

“It wasn’t tough,” Shannon said Saturday after the game. “We’ve been working him a little bit, and you have to give a young man the opportunity. I had confidence in him, and he responded late in the game.”

Morris started getting regular reps in practice in recent weeks as regular back-up Alonzo Highsmith has been hampered by a wrist injury. He owns the strongest arm on the roster, can move outside of the pocket and has obviously shown the coaches and his teammates that despite his age and inexperience, he was capable of doing what he did Saturday.

“I’m really proud of him,” junior center Tyler Horn said Saturday. “He came in, he rallied us, he grabbed us and said `come on guys, we’ve got to do this.’ He led us. He’s a natural leader.”

Morris enrolled at the University of Miami in January after a standout prep career at Pace, where he passed for 3,536 yards and 41 touchdowns his junior and senior seasons. That success carried over into the spring, when Morris completed 12-of-21 passes for 209 yards and two touchdowns in the Hurricanes’ spring game in March.

Since that time, Morris has continued to learn the offense while at the same time, helping prepare Miami’s defense for its upcoming opponent as the scout team quarterback. It’s a thankless role that requires far more work than praise received.

That will be someone else’s job this week though.

We’ll find out soon enough whether or not Harris will be available against Maryland. If he is able to go, the `Canes will have their veteran leader back under center. If not, Morris will make his first career start in front of his home crowd. In the meantime, he’ll be taking first team reps in practice and improving on what he started building in Charlottesville.

It may be a little earlier than expected, but if his brief outing Saturday is any indication, he’ll be ready to go.