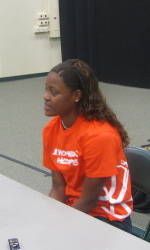 Head coach Katie Meier and three players from the University of Miami women’s basketball team met the local media at the basketball Field House on Wednesday afternoon to talk about the upcoming season.

Preseason All-ACC member Shenise Johnson along with fellow 2010 All-ACC player Riquna Williams and freshman guard and 2010 Miss Florida Basketball Krystal Saunders each discussed what they have been working on to improve upon Miami’s 2010 WNIT Finals appearance.

Below is a sample of what they said.

Opening Comments
We just got back from our ACC media day yesterday, so I’m in the mode now. I am really excited [for this season]. You can talk about our returners and talk about over 67 percent of our scoring is back and 58 percent of the rebounding. We feel real good about that.

You are going to talk a lot about [Riquna Williams] and [Shenise Johnson] and you should. They are as good as advertised. I think [Williams’] game is far enhanced. I challenged her by saying if I got a phone call from a scout or WNBA general manager and they want to know if our kids are for real. I’ll tell them I got two of the best guards in the country. Shenise Johnson is a complete player. She can hit the triple-double mark on any given night. Riquna Williams is a great scorer, and she’s more committed to getting to the rim and distributing the ball. She’s multi-dimensional. She can light it up and get 12 points in the blink of an eye like she did in the NIT run last year. She’s talking to me a lot about [her] defense and she says her job is to not let the ball across half court. So I have two players that are at the top of the nation and are looking around and seeing what Miami needs from them. That’s feels really good. But there is more coming from the team than just those two. I’m excited about that.

On expectations for the year
This year my role is to just come in and take a lot of pressure off of [Williams] and [Johnson] and open it up for them. My shot will open up the court for them to score.

On prospects for the season
This year I think we can make it to the [NCAA] tournament. We are a much better team. I think we have a lot of depth and the chemistry this year will take us there.

On preseason ACC ranking
I don’t believe in the rankings. I just think that they’re just numbers because at the end of the day we know that we shouldn’t be number eight. I think that’s just for the media. We are much better than number eight.