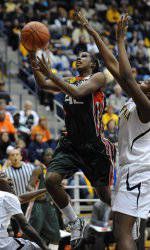 Miami guard Shenise Johnson has been named to the Preseason All-ACC team as announced by the conference office on Tuesday from the ACC Women’s Basketball Media Day held at the Greensboro Coliseum.

Johnson already has been named to the preseason Naismith Trophy and Wooden Award National Player of the Year watch lists and becomes the first Hurricane since Tamara James in 2005 to be named a preseason all-conference member.

Last season, Johnson led the Hurricanes to a championship appearance in the Women’s National Invitational Tournament. Along the way, she was named First Team All-ACC and made appearances on the All-ACC Defensive Team as well as the WNIT All-Tournament Team.

The Henrietta, N.Y. native scored 19.0 points per game last season and added 7.7 rebounds and 4.6 assists per contest as well. She was the only player in the Atlantic Coast Conference to rank among the Top 10 in each of those categories.

As a team, Miami was chosen by the Blue Ribbon Panel – an ACC panel consisting of media members and school representatives that vote on weekly and season awards – to finish eighth in the conference preseason poll.

Duke, led by the ACC Preseason Player of the Year Jasmine Thomas was selected to win their second-straight conference title.