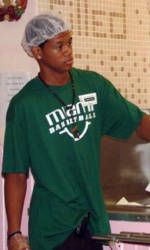 Getting to Know Rion Brown

This true freshman hails from Hinesville, Ga., and was the Class 3-A South Player of the Year by the Georgia Athletic Coaches Association as a high school senior in 2009-10. A McDonald’s All-America nominee, he was rated as the No. 15 shooting guard by Scout, No. 47 shooting guard by ESPN and No. 61 nationally by Rivals. Rion (pronounced Ryan) Brown averaged 22.8 points per game, while shooting 55 percent from the field and 38 percent from beyond the arc as a senior, setting school records with a single-game high of 42 points and the single-season record of 660 points.

Expected to make an immediate impact for the Hurricanes, Brown is a strong leaper who can fly up and down the court in the transition game and comes from basketball bloodlines. His father, Tico Brown, played collegiately for Georgia Tech,is the CBA’s all-time scoring leader (8,538 points) and was voted to the All-Time CBA Team.

While waiting to see what RC Brown can do on the court, let’s see what’s going on in his head.

Getting to Know U — Rion Brown

My favorite thing about being part of the U family is my teammates
One thing that everyone should know about Miami basketball is we’re very family oriented
If I could play any other sport at UM, it would be diving
Best friend on another college team: Jordan McRae (Tennessee University)
My first memory of playing basketball is rec basketball when I used to wear glasses
If I were a superhero, my name would be Reon and my superpower would be transporting
No one can believe I watch 16 and Pregnant
If I could only eat one meal for the rest of my life, it would be hot wings
The weirdest thing I’ve ever eaten is shark
If I were an animal, I’d be a lion
The farthest place from home I’ve been is Las Vegas
People might be surprised to know I have an overactive bladder
Dream date: my girlfriend
If I could spend a day with anyone, it would be my girlfriend
The most influential person in my life is my father
My biggest pet peeve is I hate quitters
My worst habit is crunching my teeth
If you walked into my dorm room, the first thing you would notice is the monkey
If I won the lottery, the first thing I would buy is a house for my mom
When I played basketball as a kid, I pretended to be Tracy McGrady
My first job was cleaning the house
When I was little, I wanted to be a superhero