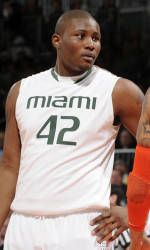 Johnson Refines His Game in China

For many college basketball players, the offseason months are used to advance their game and strengthen their skills. Reggie Johnson, the Hurricanes’ sophomore center, did this by participating in a two-week tour in China with Athletes in Action, an organization that allows college athletes a unique opportunity to use sports as a way to help others around the world. He returns to his coaches and teammates not only with an improved jump shot, but also with improved character.

The trip required a lot of adjustments, including getting used to the time difference and food, but Johnson looks at the experience as a positive one both mentally and physically. In a recent interview with HurricaneSports.com, Johnson talked about the tour and his experience as an American basketball player in a foreign culture.

HurricaneSports.com: How did you get involved with Athletes in Action?

Johnson: My head coach Frank Haith referred me to it. He sat me down and introduced me to it, and I explored it more and felt like it was a good thing

HurricaneSports.com: How long was the tour in China?

Johnson: I actually only ended up going for about half of the tour because I had to finish up math in summer school. I was there for about two weeks.

HurricaneSports.com: Where in China were you?

Johnson: We were in places I can’t even name. Beijing was the last place we ended up, and it’s an amazing city.

HurricaneSports.com: Were the Chinese citizens able to communicate by speaking English?

Johnson: They tried, but it was so-so. Every time we walked by they said “Yao friend” and I kept asking, “What are they saying?” This guy told me they thought we were Yao Ming’s friends. “Yao friend, Yao friend” they kept saying.

HurricaneSports.com: What was the hardest challenge you faced during the Athletes in Action tour?

Johnson: Eating! That was the hardest challenge. I found out that American Chinese food is made to American liking. Over there, you’re eating duck head and you’re eating chicken… I don’t know what it was! I tried to find a McDonald’s, but it was hard.

HurricaneSports.com: Were your teammates other players from American Universities?

Johnson: I had teammates from Wright State, Ball State…  they welcomed me in quickly. We really clicked as soon as I got there – same type of groove, funny, love to have fun and about winning. So I met a lot of guys that I could see myself being friends with long term.

HurricanSports.com: How do you think the experience will benefit your performance this season?

Johnson: It definitely will help because in China they’re very physical. You go for a lay up, they’ll come and take you’re head off.  So it gave me a chance to play through physicalness and stay calm. Over there, they mean no harm by it, they’re just playing hard so it benefited me by helping me get more tough and more mental.

HurricaneSports.com: How did you keep up with your workout regimen and diet?

Johnson: Trying to find a gym was hard because we were always on the move from meeting with people, talking to kids and then working out. So it was hard but I found time.

HurricaneSports.com: Did you play against only Chinese basketball teams or other international teams as well? How was the competition?

Johnson: We played only Chinese teams – against their version of NBA teams, so those guys were amazing. They play hard, they got a lot of skill – I was surprised. I didn’t know China had basketball players like that. Those guys wanted to learn. They asked me, “How can I do this? How can I do that?” It was a great experience.

HurricaneSports.com: Did it take some time getting adjusted to the Chinese culture? What were some of the things that stood out most to you?

Johnson: I don’t think I ever got adjusted- it was hard! I got just the time- difference, but the culture is different from America. You’d be on the train, and they don’t believe in personal space. They’re going to fill the train in until they can’t get in any more. It was different, but it was fun.

HurricaneSports.com: Other than playing basketball, what else did you get to do?

Johnson: We traveled for fun. I actually went to the Great Wall of China and that was an experience for me. After reading about that in history class and then actually going to it and walking it, it was amazing. I can’t even explain it – that might be one of the top three things that happened in my life.

HurricaneSports.com: How did you communicate with your friends and family at home?

Johnson: Skype. I made sure my mother, my high school coaches and everyone had Skype before I left. It was hard because I was waking up at six in the morning trying to get them because of the time difference.

HurricaneSports.com: Was there a specific part of your game that you worked on improving during your time playing with Athletes in Action?

HurricaneSports.com: Did you learn anything interesting from your teammates?

Johnson: Other than basketball, I learned a lot about God. We sat down and had meetings and just got in touch with ourselves, and it just brought me closer to God.

HurricaneSports.com: You said you worked with kids during the tour. What kinds of things were you doing with them?

Johnson: We had camps for them, taught them how to do jump hooks, back somebody down, fake going this way and left hand lay ups. It was fun. They were in awe having Americans over there working with them. Some of the guys were 14 and taller than me!

HurricaneSports.com: You had a strong freshman campaign with the Hurricanes culminating in a great ACC Tournament run. After your time in China with Athletes in Action, what can we expect from you this season?

Johnson: I’m amore humble person. Being American, you take things for granted sometimes, and over there, they don’t have the means that we have. So I just want to be grateful when an opportunity comes – be more grateful for the little things.