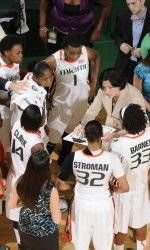 Stephanie Gardner, a New Jersey native, is the first of four Hurricane freshmen to take time to sit down with HurricaneSports.com and tell `Canes fans what it has been like to be a new face in a new place and what expectations she has for herself and the Hurricane women’s basketball team this season.

What made you choose the University of Miami?
I chose Miami because of the high quality of the athletics and academics. I love that I get to compete in the ACC, the best basketball conference, while at the same time earning a degree from such a top university. I also can’t complain about the weather, being from New Jersey, I was sick of the cold and snow; I love the weather in Miami, sunny every day!

What are some of the goals that you have for yourself and for the team this season?
Personally, the goal I have this year is to contribute on the court and be a good teammate. I want to help the team do better than we did last year and have greater success than the program has seen yet.

For the team, I want to see us improve what they already built. Last year the team had an awesome year, I want us to get more wins, and finish strong in the ACC. A great goal for the year is to definitely have an NCAA Tournament appearance.

You spent six weeks of your summer on-campus taking classes and working out. What did you learn during that time about being a student-athlete at The U?
Summer Session II taught me time management!  I learned how important it is to be on time! I was literally three minutes late once to a class and the professor called my academic advisor before I even showed up to study hall later that afternoon. I learned stay on time and that on-time means early! If I am not 15 minutes early to everything, I am late.

Of the veterans on the team, who do you look up to the most and why?
I feel that I look up to Shenise “Moe Moe” Johnson the most. She has achieved so much and she is only a junior on the basketball court. Moe has set a high bar for the incoming freshmen and transfer players. She works hard, she is vocal and she has the mindset of a winner. Moe is a great role model.

Tell us something interesting about yourself that the public does not know.
I am afraid of snakes, they remind me of the devil and they are so scary looking.

Who is the best dancer/singer on the team… the funniest… the loudest?
Best dancer: Me

Funniest: Everybody has their moments… it’s a funny group, everyday in the locker room is someone else

Have you seen any celebrities since being in Miami?
Oh my gosh, who haven’t I seen. I saw Carlos Boozer today! I took a picture with Lebron James and Chris Paul when they were in the Practice facility working out. I have seen Chris Bosh… it’s celebrity city down here!

Now that you have been a Miami resident for a few weeks, what advice would you give LeBron James and Chris Bosh?
Come to our games!