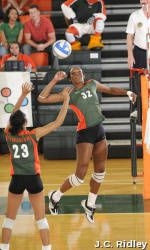 Norman, Okla. – University of Miami junior Lane Carico had 15 kills and 11 digs for the Hurricanes, but it was not enough on Saturday evening, as the `Canes volleyball team fell, 3-1 (25-21, 25-23, 16-25, 25-19), to the University of Oklahoma in the final match of the Nike Invitational at McCasland Field House in Norman, Okla. Miami and Oklahoma each went 2-1 on the weekend, respectively.

In the third set, UM used four kills from Carico and another three from freshman Taylor Hollins to earn the Hurricanes the 25-16 win. Miami trailed to start the set, 8-4, before going on a blistering 11-1 run behind the strength of Hollins and Carico, putting the `Canes in front, 15-9. Sophomore Nrithya Sundararaman added two assisted blocks and a kill down the stretch, and teammate Lici McGee added another kill to send the match to a fourth set.

In the fourth set, UM stepped in front first with a 6-3 edge behind a kill and service ace from Ariell Cooke – added a kill from McGee. OU’s Warren and Sarah Freudenrich grabbed two blocks apiece, while Andrea McQuaid added a service ace to put the Sooners on top, 10-7.

Oklahoma (2-1) would never look back, as Suzy Boulavsky collected five of her 14 kills in the match, with teammate Freudenrich adding three of her own, giving the Sooners the match-victory courtesy the 25-19 advantage in the fourth frame.

The Sooners were led on the night by Boulavsky with a team-high 14 kills, the only OU player in double-figures for kills. Boulavsky added three assisted blocks, and Freudenrich pitched in with six kills and five blocks (two solo). OU libero Maria Fernanda went low for a match-high 16 digs.

The `Canes were paced in the match by Carico’s double-double effort of a match-high 15 kills and 11 digs. Oklahoma native Lici McGee, in her return to her home state, finished with eight kills and three blocks (two assisted). Senior Ariell Cooke continued her solid play throughout the weekend, registering six kills and a match- and career-high seven blocks (assisted).

The Hurricanes will have their own home-opener on Tues., Aug. 31, when they host Florida Atlantic at the James L. Knight Sports Complex. Match time is set for 6 p.m.