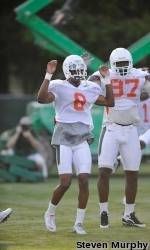 CORAL GABLES, Fla. – Junior quarterback Jacory Harris threw for 106 yards and a touchdown and senior cornerback DeMarcus Van Dyke sparked a fired-up defense with five tackles and a pass-break up as the University of Miami football team completed its first scrimmage of fall camp.

Miami worked through roughly a 100-play scrimmage, which for the first time under head coach Randy Shannon featured live special teams in the first scrimmage of the season. After spending the first seven possessions starting from the 35-yard line, the `Canes started series at the 50-yard line before ending the scrimmage with a couple of red-zone possessions.

In a very evenly managed scrimmage for the first one of the fall, the offense managed five touchdowns and senior placekicker Matt Bosher connected on two field goals. Miami’s defense forced four punts and three turnovers on downs, an interception and recovered a bobbled hand-off.

Harris hooked up with senior wide-out Leonard Hankerson for a 50-yard touchdown pass. Hankerson, who was just named to the Biletnikoff Watch List, caught two passes for 63 yards on the night, but it was the emergence of players like junior wide receiver Aldarius Johnson, running back Mike James and safety Ray Ray Armstrong who stepped it up in the first scrimmage.

Takin’ the Next Step
The 2010 season could be special for several `Canes’ players. A few of those players looked like they took that next step in the first scrimmage of the season. Junior wide-out Aldarius Johnson, who missed three games in 2009 with an injury, showed flashes again of why his high school nickname “Glue Hands” is still around. Johnson hauled in three catches for 56 yards, which included a 23-yard scoring strike from sophomore quarterback Alonzo Highsmith, in the `Canes first scrimmage. He nearly had his second TD catch when he caught a 24-yard pass along the right side line, but was forced out by two defenders before he came down in bounds.

Sophomore running back Mike James ran hard and caught a few passes out of the back-field as he eased back into the tailback position. James spent most of his freshman season playing fullback – something he hadn’t done much of in high school. In 2010, he will add even more depth to a very deep running back group. James scored the first two touchdowns of Wednesday night’s scrimmage. He scored from two yards out on the third drive and again from three yards out on the fourth possession. He carried five times for 17 yards.

Defensively, safety Ray Ray Armstrong, linebackers Ramon Buchanan, Kylan Robinson and defensive tackle Marcus Forston continued to grow into their roles at Miami. Buchanan, who saw increased action at one of the outside linebacker spots after Sean Spence missed some games last season, led the defense with six tackles Wednesday night. Robinson continued to get himself acclimated to the middle linebacker role that he took over during spring ball. Forston, who was named to the Outland Trophy Watch List for top lineman despite only playing in three games last season, looked to be ready to go for 2010. He tallied a couple of sacks and even caught tight end Chase Ford from behind after a 15-yard gain.

A Special Twist
For the first time under head coach Randy Shannon, Miami incorporated live special teams into its first scrimmage. Kicker Matt Bosher handled kickoffs, punts and connected on a couple of PAT’s and field goals from 26 yards and 42 yards out. Freshmen Darion Hall, Eduardo Clements and Storm Johnson returned a few kickoffs. Johnson broke loose for a 41-yard return but Clements’ 68-yard return was the most impressive of the night. Ramon Buchanan made some big hits on kickoff coverage and true freshman Devont’a Davis blocked the second punt of the scrimmage and Johnson made the recovery.

The Hurricanes have usually waited to the third scrimmage to do some live special teams’ work.

Scrimmage Highlights and Stats
– Senior cornerback DeMarcus Van Dyke had a pass breakup on third down on first possession
– Big Hits: Adrew Smith on Damien Berry, Ray Ray Armstrong on Chase Ford
– Storm Johnson had a blocked punt recovery, an 11-yard run, 41-yard kickoff return and a big downfield block on Alonzo Highsmith’s 23-yard TD run
– The defense opened the scrimmage with two straight three-and-outs
– Mike James carried five times for 17 yards and scored the first two touchdowns of the scrimmage on a 2-yard run and 3-yard run.
– Jacory Harris threw to Aldarius Johnson for a 26-yard gain to the 2-yard line. Johnson later caught a 23-yard TD from Highsmith
– On the fourth series, Lamar Miller ran for first downs on 14 and 10-yard runs and caught a 19-yard swing pass from Highsmith
– Spencer Whipple completed a nice pass to Tommy Streeter for 16-yard gain and a first down
– Pass break-ups: Kelvin Cain, DeMarcus Van Dyke, Jared Campbell, Ryan Hill, Devont’a Davis
– LaRon Byrd caught a pass from Stephen Morris on third-and-long for a 19-yard gain and a first down. Byrd converted another first down on an 11-yard reception from Highsmith
– Luther Robinson, McCarthy, Andrew Smith, Adewale Ojomo, Marcus Forston (2) registered sacks
– Damien Berry had a 13-yard run on fourth-and-one
– Bosher made field goals of 26 and 42 yards
– Eduardo Clements had a 68-yard kick-off return
– Ray Ray Armstrong recorded the only interception of the night
– Chase Ford gained 15 yards after breaking a couple tackles on a pass from Highsmith
– Kendal Thompkins shook defenders on a 14-yard reception and 12-yard reception from Spencer Whipple
– Darion Hall cut against the grain and broke tackles for a 35-yard run
-Quarterback Alonzo Highsmith ended the scrimmage with a 23-yard run for a TD