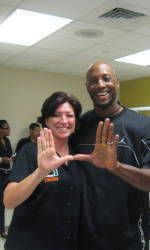 Meier, along with Mourning and Wade held a closed door discussion panel with a select group of current high school student-athletes aimed at giving advice on how to be successful in and around sports.

The Summer Groove Hosted by Zo and D. Wade was a five-day weekend fundraising event that had something for everyone: golf, comedy, concert, benefit dinner, youth summit, youth basketball clinic and sports conference, a free block party, an all-star basketball game and numerous exclusive functions. In its 14th year, The Groove has raised more than $7 million for local South Florida programs and initiatives supported by Alonzo Mourning Charities and Wade’s World Foundation.