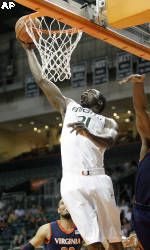 It marks the second-straight season that a Hurricane has been selected in the NBA Draft.

Collins becomes the 18th Hurricane overall and the fifth since 2002 to be selected in the NBA Draft. Jack McClinton was the last Hurricane taken in the draft, picked 51st overall by the San Antonio Spurs in 2009.

“I’m really happy for Dwayne and his family,” said Miami head coach Frank Haith, who has had three NBA draft picks during his UM tenure. “I have had many conversations with the management at Phoenix, and I think it’s a team he could make and contribute to.”

A four-year player for his hometown Hurricanes, Collins led Miami in scoring and rebounding as a senior starter in 2009-10, averaging 12.0 points and 7.8 rebounds per game, while shooting an astounding 60.4 percent from the field – the second-best single-season field goal percentage in program history. Collins – owner of a 7 foot, 4 inch wingspan – also posted a team-high 32 blocks.

Just the second player at Miami to record 1,000 points, 850 rebounds and 100 assists over his collegiate career, he became UM’s top post presence inside, recording 56 double-digit scoring performances, while his 21 career double-doubles are the fifth-most in program history. Tied for third in the Miami annals with appearances 126 games, Collins closed his UM career 19th in career points with 1,245 – including a season-high 26 points on 12-of-14 shooting in Miami’s win over Duke in 2008, which garnered him National Player of the Week honors by both ESPN and Rivals.com.

A tough player versus tough opponents, Collins was also instrumental in Miami’s wins over Wake Forest on Jan. 9, 2010, with 23 points and 11 rebounds and versus then- No. 20 Georgia Tech on Feb. 10, 2010 with 13 points, 11 rebounds and three blocks. In both games, Collins excelled versus 2010 NBA lottery picks.