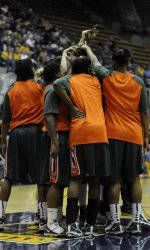 CORAL GABLES – One week after signing a five-year contract extension, University of Miami women’s basketball coach Katie Meier has announced that Vernette Skeete has been named the new assistant coach of the Hurricanes.

“Coach Skeete has tremendous energy and character – something that just impressed me from day one. Her desire to push every person she meets towards greatness is perfectly in-line with our philosophy here at Miami,” said Meier. “Her experience at various levels of basketball will help her connect in recruiting and connect with our current players as we continue to develop All-ACC performers.”

Skeete, who was brought to the staff a season ago as the coordinator of basketball operations fills the role vacated by three-year assistant Lonnette Hall.

“I am passionate and excited to be a part of the vision that Coach Meier has for this program,” said Skeete. “The expectation of greatness that she has set for this program is within our grasp and I am ecstatic to be able to reach those goals with her and this program.

Before coming to Miami, Skeete spent the 2008-09 season at Northwest Florida State College in Destin, Fla. as well as the previous five seasons with the Essence Girls Basketball Club Program and the 2005-08 seasons at Malone High School in Malone, Fla.

In her new capacity, the Bascom, Fla. native will have on-court coaching responsibilities as well as preparing opponent scouts and recruiting.

Along with Skeete, the women’s basketball coaching staff is looking to build off the success of the 2009-10 season. The Hurricanes advanced to the WNIT Championships Game – the first time that any women’s basketball team in program history won more than one postseason game – and compiled a 22-14 record.

Retuning for Miami next season will be the nation’s top back court in junior Shenise Johnson and Riquna Williams as well as a Top-20 recruiting class.. Johnson was named First Team All-ACC, with Williams – the ACC’s second leading scorer – earning second team honors.