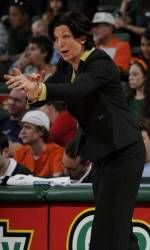 University of Miami and Katie Meier Agree to Five-Year Extension

“We are excited about the tremendous progress our women’s basketball team achieved this past season,” said Hocutt. “Coach Meier continues to assemble a special group of talented young women at the University of Miami and we look forward to the future success of our program.”

Meier, 42 guided the Hurricanes to one of the best seasons in program history during the 2009-10 campaign, as Miami won five straight postseason games to advance to the WNIT Championship game. Prior to last season, no UM women’s basketball team had won more than one postseason game.

“I love working for the University of Miami,” said Meier. “I’m very proud to work for both Kirby Hocutt and President Shalala – two individuals who have recognized the progress we have made in women’s basketball and more importantly are as confident as I am in the future success of this program.”

Last season, Meier’s squad defeated two Top-15 teams – No. 9 North Carolina and No. 11 Florida State. It was the first time since 1991 that Miami had defeated any team ranked as high. In addition, the Hurricanes snapped Maryland’s 48-game home win streak in January.

“I am energized everyday by the possibilities and challenges of coaching Miami in the ACC. I have been blessed with such an incredible group of current and past players, and those people, along with my staff and the entire University of Miami community make this a great environment in which to be successful” added Meier.

During her tenure at Miami, Meier has had four players named All-ACC, including two from last season. Sophomores Riquna Williams and Shenise Johnson were second and third in the conference in scoring en route to first-team honors for Johnson and second-team accolades for Williams. Of the 10 student-athletes on the top-two conference teams, Williams and Johnson were the only sophomores.

“Anytime a coach returns two All-ACC performers and the nucleus of a team that made a deep postseason run, combined with another Top-25 recruiting class, it becomes a season to look forward to,” said Meier.

Meier’s last three recruiting classes have ranked among the top-25, including a No. 19 ranking for the incoming 2010 class. Two of her classes have included McDonald’s All-Americans – in Johnson (2008) and Morgan Stroman (2009).

“Our women’s basketball team continues to build momentum each year with Coach Meier’s leadership,” said UM President Donna E. Shalala. “Her stellar recruiting classes have made it possible to compete at the highest level.”