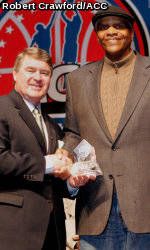 Will Allen Among TIME's 100 Most Influential People

CORAL GABLES, Fla. – FormerUniversity of Miami men’s basketball player Will Allen has been selected by TIME Magazine as one of the world’s 100 most influential people for his work with his non-profit organization Growing Power.

Growing Power is transforming the cultivation, production and delivery of healthy food to underserved, urban populations who have struggled with health problems such as obesity and diabetes due to limited access to safe and affordable fresh fruit and vegetables.

Through a variety of low-cost farming techniques, Growing Power produces vast quantities of food throughout the year in Milwaukee, while the cultivation of produce and livestock has begun at other sites in and around Milwaukee and Chicago.

Over the last decade, Allen has expanded Growing Power’s initiatives through partnerships with local organizations and continues to host internships and workshops to provide hands-on training to those interested in establishing similar farming initiatives in other urban settings.

“Will is an exemplary human being,” said Miami head coach Frank Haith. “With his focus and determination, he does so much good for the Milwaukee community – and clearly the world at large. All of us fellow Hurricanes could not be more proud of his accomplishments or more pleased to boast Will Allen as one of our own.”

TIME’s selections were divided into four categories – leaders, heroes, artists and thinkers, with Allen joining 24 others such as former president Bill Clinton as one of the world’s heroes. Those chosen for the 2010 TIME 100 also include President Barack Obama, Ben Stiller, Serena Williams, Lady Gaga, Steve Jobs and Oprah Winfrey.

Allen, co-founder and director of Growing Power since 1995, graduated from Miami in 1971 after a three-year basketball career. With 1,293 career points, he ranks 17th among the Hurricanes’ all-time leading scorers, is second in career rebounds (916) and remains among the program’s top 10 in career 20-point games (28).

After a career in professional basketball and corporate marketing, Allen returned to his roots as a farmer and has taught workshops to aspiring urban farmers across the United States and abroad.

In March, Allen was recognized as a 2010 ACC Men’s Basketball Tournament Legend, and in 2008 he received a $500,000 “genius” grant from the MacArthur Foundation for his tireless work with Growing Power.