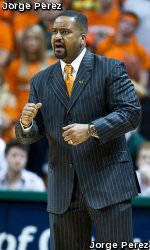 Swoope averaged 21.8 points, 8.9 rebounds, 1.6 assists and 1.5 blocks per game as a senior at Harvard-Westlake, converting 74 percent from the field and 71 percent from the foul line. An athletic basketball player, he is known for attacking the basket and his ability to finish plays.

The Mission League’s Most Valuable Player and a Los Angeles Times All-Star Team selection in 2010, Swoope averaged 26.2 points over his last six games and scored a season-high 40 points on 14-of-17 shooting from the field – including hitting 12-of-13 free throws – in a win over Notre Dame Prep. It was among his 16 games of 20-plus points, including eight outings with at least 30 points. In addition, he posted 12 double-doubles as a senior, including a 30-point, 21-rebound effort versus South Hills.

“Erik is a tremendous athlete with great hands and a strong physical presence and body that is college ready,” said Haith. “He is a combo player that can go inside and out. Erik is so dynamic that I don’t want to pinpoint him to just one position. He reminds me of PJ Tucker – who I coached at Texas.

“Erik is really a phenomenal young man and student. He will be a great ambassador for this university.”

The L.A. Daily News referred to Swoope as the “most dominant boys’ basketball player” in the San Fernando Valley and he was selected as the ESPN Rise California State Stat Star of the Week on Feb. 11, 2010. He has been invited to participate in the High School Academic All-American Classic, and attends the same high school that produced NBA players Jason Collins (Atlanta Hawks) and Jarron Collins (Phoenix Suns).