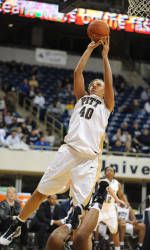 CORAL GABLES – The University of Miami women’s basketball team and head coach Katie Meier announced on Thursday that Stephanie Gardner and Shawnice “Pepper” Wilson will be joining the Hurricanes program.

Gardner, who signed a National Letter of Intent, hails from Glassboro, N.J., led her Glassboro High team with 22.6 points per game her senior season. As a 5-7 guard, Gardner scored 30 or more points on four occasions this season and ended her career with 1,215 points.

“Stephanie is an absolutely awesome late signee for my staff and our program,” said Meier. “She is very talented, but she is also extremely humble and eager to do everything in her power to make Miami a contender.”

The team captain the last two seasons, Gardner earned Team MVP honors this past season and was named to the All Tri-County First Team. The Al Carino Basketball Club named her one of the best girls basketball players in South Jersey and her toughness on the court is nearly unmatched.

“She’s the hardest worker on the floor, diving for loose balls and taking the charge,” said her Glassboro coach Rick Winsiewski.

Miami’s second addition to the program is 6-6 center Pepper Wilson, who is transferring to the Hurricanes after playing two seasons at Pitt. Wilson won’t be eligible to play for the Canes until the 2011-12 season, but her athleticism and height will add another dimension to the squad.

“We are so incredibly thrilled to have filled such a major need in our program. Everyone who watched our success this year knows that we needed to add some size, so I am quite pleased to welcome Pepper, whom I consider one of the dominant centers in the country,” said Meier.

In her two seasons at Pitt, Wilson averaged 6.9 points and 5.3 rebounds per game and recorded an impressive 83 blocks in 57 starts. The Pittsburg native was named to the BIG EAST All-Freshman team and was a finalist for the USA Basketball U19 squad.

“We originally recruited Pepper out of high school and really felt like she was a program-changer. We are excited that she still had positive feelings about Miami,” added Meier. “Adding her to our already dynamic lineup should change the perception of Miami and vault this program into the upper echelon of the ACC.”